It’s funny how there seems to be a point in the lifespan of a friendship when you start to reminisce. Usually with photos.

I’ve been wondering how long you have to be friends with someone (or if there are specific experiences you have to share) before you can really reminisce.

Tonight, though, I was reminded of a sandwich that was sent to me via email; J was still in Italy and he and his friend wanted to include me in their lunch or dinner or something and got the idea to mail me a sandwich… until I pointed out it wouldn’t survive a week in transit. So I got this: 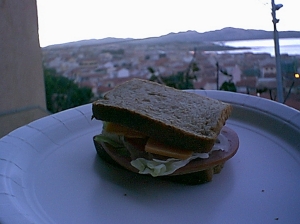 I like the photo because it also shows the view from the friend’s house at the top of the hill where he lived in Italy… but also because it’s just plain funny.

The other funny thing about Navy friendships (and military friendships in general) is that you never know when someone is going to turn up that you haven’t seen in a while. And then I get asked if I remember a certain sandwich….