So, I mentioned in passing (in my last blog entry, actually) that some of the photos from my trip to the North Carolina Outer Banks were taken while I was wearing a red ball gown. I said I’d come back to that. This is me coming back to that. 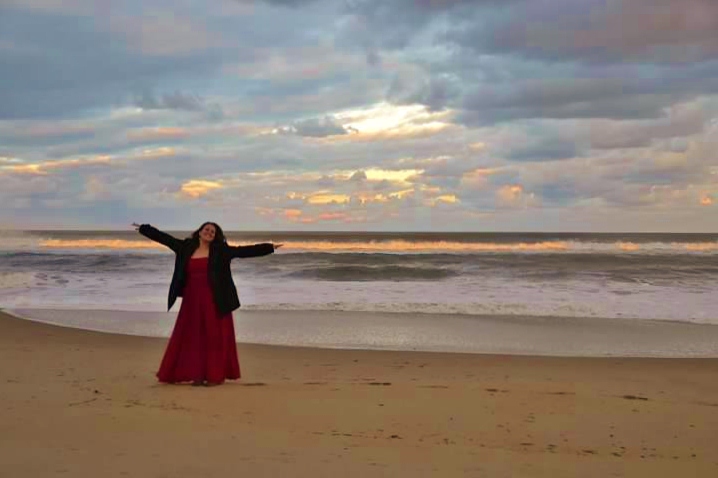 There is a movement called the Traveling Red Dress. It’s about supporting people, sending encouragement to people who need it, whether you know them or not. The Red Dress can be anything (although usually it is an actual red dress) that represents all the times we say no to ourselves because something isn’t sensible. And I’ve said no to non-sensible things a lot in the last few years. I call it my “Grown-up Brain” and it drives me a little nuts, because really I want to wear a hat with ears and eat rainbow cupcakes and watch My Little Pony. And I may do all of those things (when I’m at home, and don’t usually admit such things) but really I mostly talk myself out of things with: “You’re thirty. People who are thirty don’t do that.” Or “You don’t need that right now, it can wait.” Or “Maybe I shouldn’t be admitting to people that I really do like My Little Pony.” You know, all the usual things people my age have to logic their way through in daily life.

And then comes the dress.

Last year, when J was deployed, I had a lot on my plate. I was stressed beyond belief. And I wound up making a much needed trip to North Carolina to visit friends and family.

And when I got home again, I found that someone, a stranger I didn’t know from Oregon, had mailed me a Red Dress. I’d been sponsored for one.

The whole point of the Red Dress is to have it, be fabulous in it, have your picture taken, and then send it to the next person who needs it. You’re not supposed to keep it.

I’ve had mine for a year.

It came to Hawaii and between the end of deployment and the start of the move and everything in between, I never got my Red Dress photos in Hawaii. Not to worry, I told myself. I’ll take them in California before J has to deploy. I was sure there would be an opportunity!

And then it took us much longer to find a place to live than expected, and he left sooner than expected, and I never got my Red Dress photos in California. No problem, I thought. I’ll be in New York this fall and I’ll take my photos there!

Then Hurricane Sandy came. No New York trip. I was, however, back in North Carolina for another visit.

So as I approached my two months in North Carolina marker, I started to wonder if I shouldn’t just send the dress on its way again. It had done its job, after all; it had made me feel special when it arrived, and I had fun trying it on and getting it fitted, and it was a RED BALL GOWN, which is something completely not sensible that I’d never have bought for myself. So I was done with it, right?

A friend of mine got in touch, wanting to get out of town for a weekend to go chasing wild horses. She also happens to take photos. I asked if she’d like taking photos of the Red Dress. She said ABSOLUTELY.

And here they are.

It was bitterly cold, the Outer Banks were getting a winter storm with high winds that cut through the fabric, and I could barely take off my wool coat, but we stood on the beach and took photos anyway.

So that was my Red Dress story. It’s ready to go traveling again. If you know anyone somewhat close to my size (I had the dress taken in, but the fabric wasn’t cut so it can be let out again– or taken in more), let me know. I’m looking for the next person who needs it.

[update]
The Red Dress was claimed and has gone traveling again. ^_^