Wildlife Wednesday: What are these ducks? 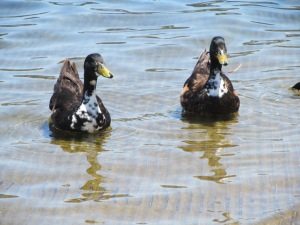 So this photo is from a couple of weeks ago when I went out for an afternoon at the lake with some friends. I’ve been encountering plenty of California wildlife that isn’t quite like the stuff I’ve seen other places, so I snapped this picture and saved it to blog about once I’d figured out what these ducks were. Given that they look the same, I assumed they were of the same species…

…which is basically correct, in that it turns out that they are both mutant mallards.

I’ve seen mutant mallards before, notably when we went to Chincoteague about four years ago, but never this consistent looking. For whatever reason, these blended with some local domestic ducks (which I saw across the lake, I might add) and turned out that way.

So there you go. Ducks can mostly all interbreed (especially ducks that were the predecessors to today’s domestic varieties, like, y’know, mallards) and sometimes they all mix up again in the wild. How do I know these are part mallard? There’s a distinct curl on the tail feather. Yeah.

This has been your wildlife Wednesday. Stay tuned tomorrow for a Throwback Thursday, assuming I can find a good photo to throw at you. ~_^