I told you last week that I have a particular soft spot for odd roadside attractions, and since I’ve recently been to one I thought I’d share a little bit about it. I’m as much interested in the stories behind the peculiar stops as the stops themselves, and this one is no exception: the Cabazon Dinosaurs.

The first dino, Dinny the apatosaurus, was completed in 1975 and “Large Marge” the t-rex was as close to being finished as she’ll ever be in 1988, at the time of the creator’s death. The dinos were meant to be a good advertisement for the Wheel Inn, the diner located in the adjacent parking lot, but have now outlived the restaurant, which was bulldozed in late 2016. There’s a, well, peculiar museum attached now, but you don’t need to pay admission to take photos of the giant dinosaurs, nor to go into the gift shop inside Dinny’s stomach (entrance in his tail). Free is the best way to go for this one, if you ask me. 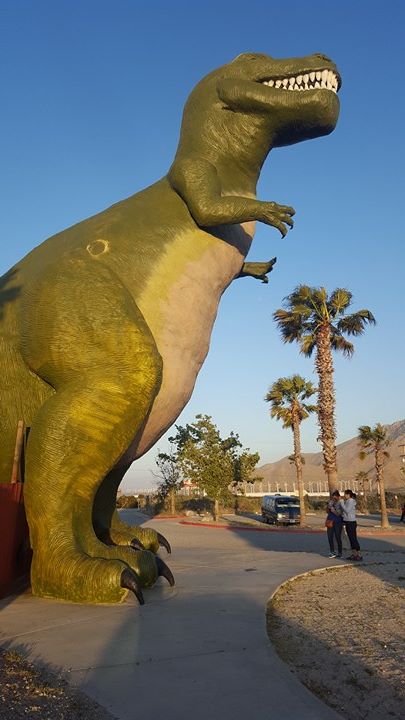 These two were all over TV in the 1980s, and appeared in Pee Wee’s Big Adventure, so they’ve got a good bit of nostalgia appeal, plus, y’know, they’re giant dinosaurs. They are a fun place to take photos.

It’s a kick to be able to actually sit on these guys’ feet, and to go up into the gift shop (even if you’re not going to buy anything) because it’s a chance to actually touch something and interact with it.

That’s one of the best things about a good roadside stop– the tangible connection not only to it, but to all the people who’ve come before. Kids climbed on Dinny before I was even born.

It’s a little surreal to see these massive figures standing above the palm trees, with the California mountains behind them, and they are obviously much larger than their fossilized counterparts, but that adds to the whimsy and charm of the experience.

I was recently there because of a weekend roadtrip with a couple of friends that took us to Joshua Tree National Park (if you follow my instagram, you’ve seen all the desert spam lately!) and this was along the highway on our drive back to San Diego from there. Definitely worth the little detour.

Have you visited the Cabazon Dinosaurs? Or do you have an off-beat roadside stop you’d recommend? I’m always looking for new places to add to my list!