Do you have random things around your home that just aren’t “doing” it for you anymore? Or maybe things that aren’t quite the right color, or that are things you bought a long time ago and still work perfectly well so there’s no justification for getting rid of them but WOW you’re tired of looking at that trashcan you bought when you were 21 and is kind of coffee stained on the lid?

Okay, maybe that last one is specific to me personally, but I’ve got all kinds of things around that are functional (or decorative) but just aren’t *quite* right. Maybe they aren’t exactly my style but they were close enough and served a purpose when I needed them.

Maybe they were things I found and tried to repurpose to save from a landfill. (I’ll get to a specific example, promise!) 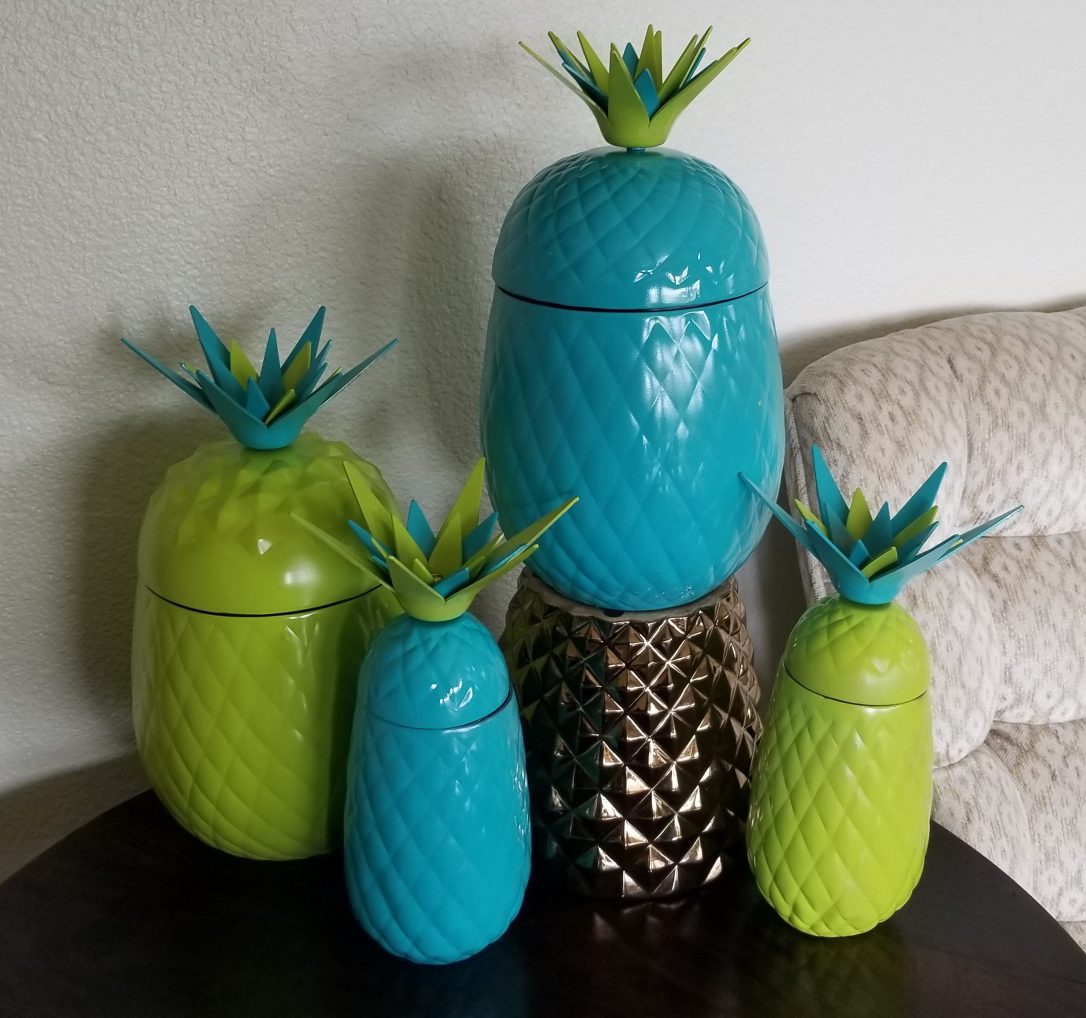 Or maybe it’s just that dingy old trashcan that has nothing actually wrong with it, I just don’t LIKE it anymore. And never really did, but when I was 21 I didn’t think about the trashcan I bought being with me for this long.

Where I’m going with this is that I’ve discovered the joys of spray paint and it’s adding all kinds of color to my life! Just in the last month, I’ve had four different projects involving spray paint refreshing, and it’s been like getting four new THINGS without doing any shopping!

Well, I shopped for paint. But paint is cheap and is included in my “repairing” exemption– I’m fixing something instead of buying a new version. Woo hoo! 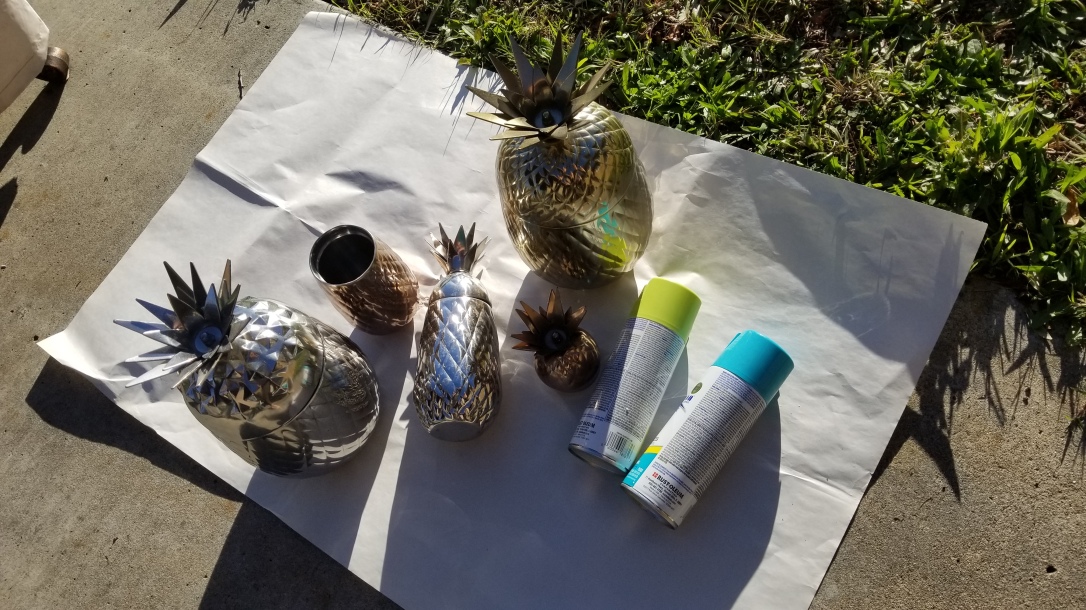 I will admit that I went a little overboard when I decided to decorate my dining room with some pineapples. “Some” is the operative word here. But when I started, I didn’t know exactly what I wanted, and then I found all of these really modern looking ones on clearance at Home Goods for like $2 each.

And then I realized that what I actually wanted was vintage, more Hollywood Regent style. These wouldn’t work.

I was going to just donate them (being on clearance, they were non-returnable), but then I realized that I’ve also been wanting kind of tiki-style decor for the back patio…..and that pineapples are perfect! Just maybe not in metallic gold and silver. 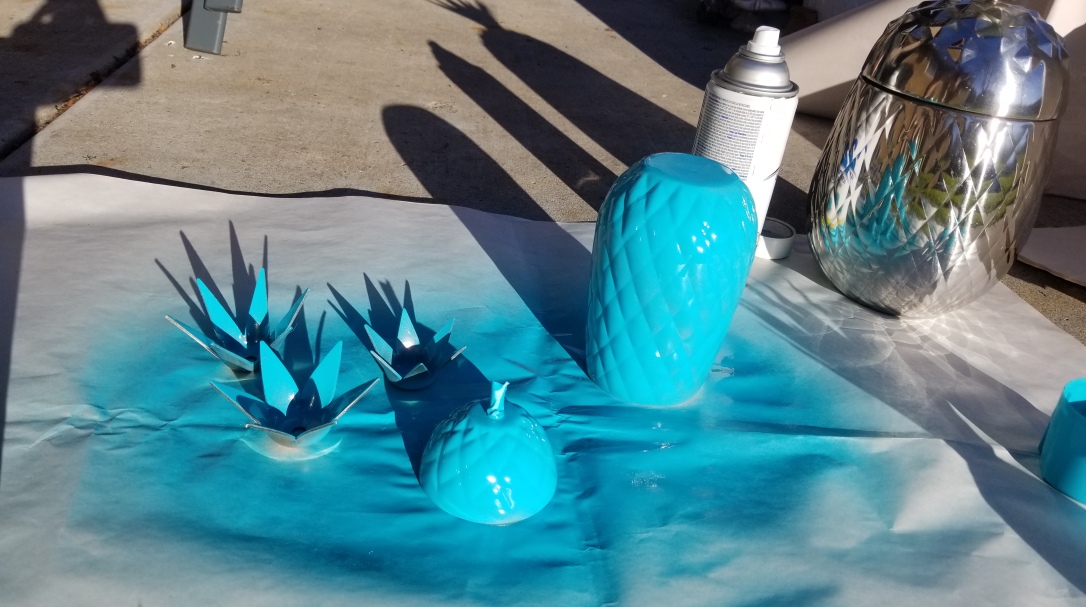 Break out the spray paint and let’s make it tropical!

It took several coats to get the paint evenly on the metal, but thanks to Rustoleum brand, I was able to get outdoor quality paint for these things, and now they are ready to decorate the patio table for cookouts this summer. Yay! 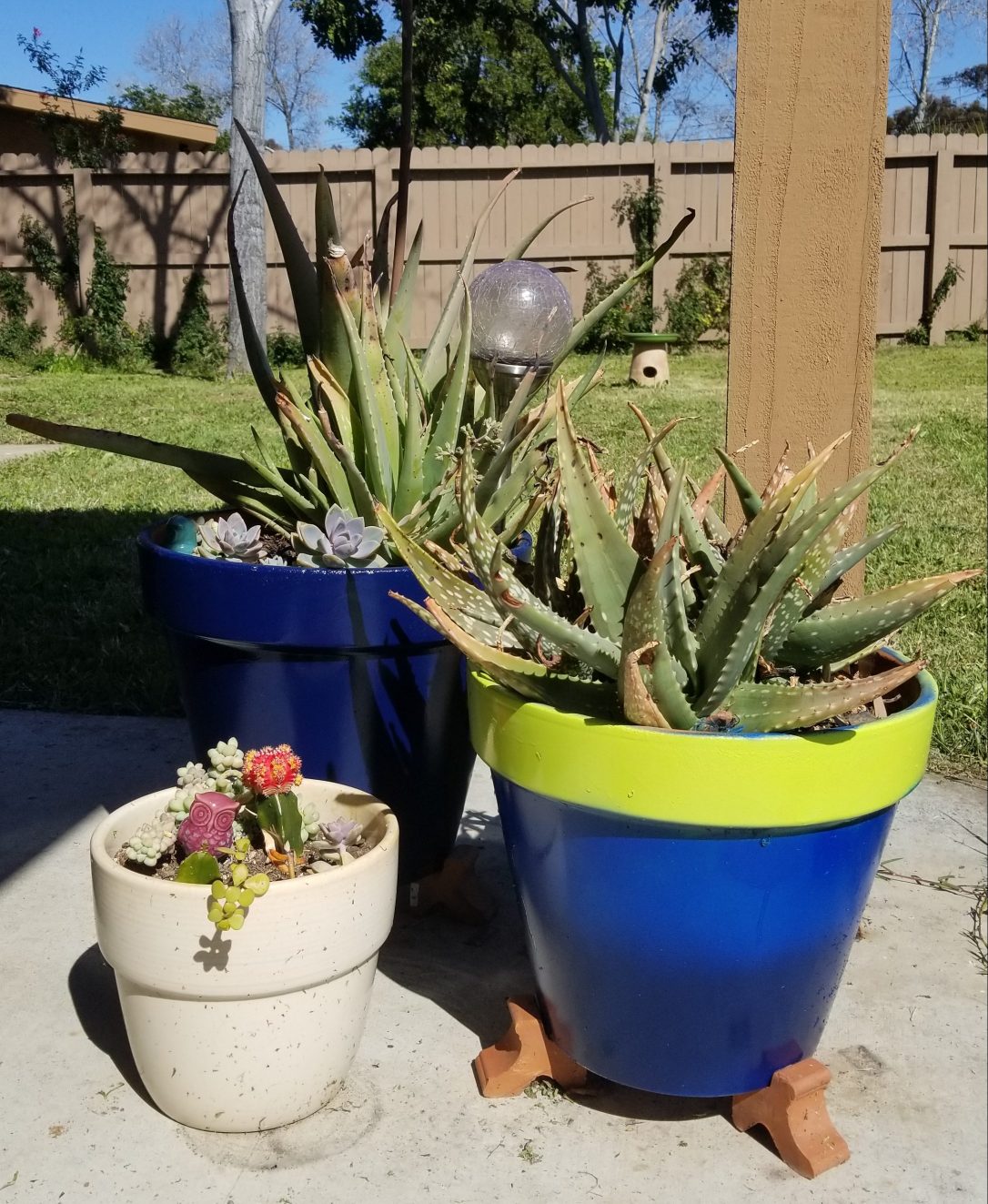 I have a whole lot of beautiful Mexican pottery in my back yard full of succulents and other plants. I also have two of the big, cheap, plain terra cotta pots that you can get for really cheap at any garden store. They hold my two aloe plants (Aloe Vera Bradley and Aloe Vera Wang) but they are by nature the color of the red clay in the backyard and also kind of the color of the house and the trim and the patio roof and…. (We live in a dated, neutral-clay color house in southern California. What can I say?) I don’t want to repot the aloe and my goal is to not buy anything…. 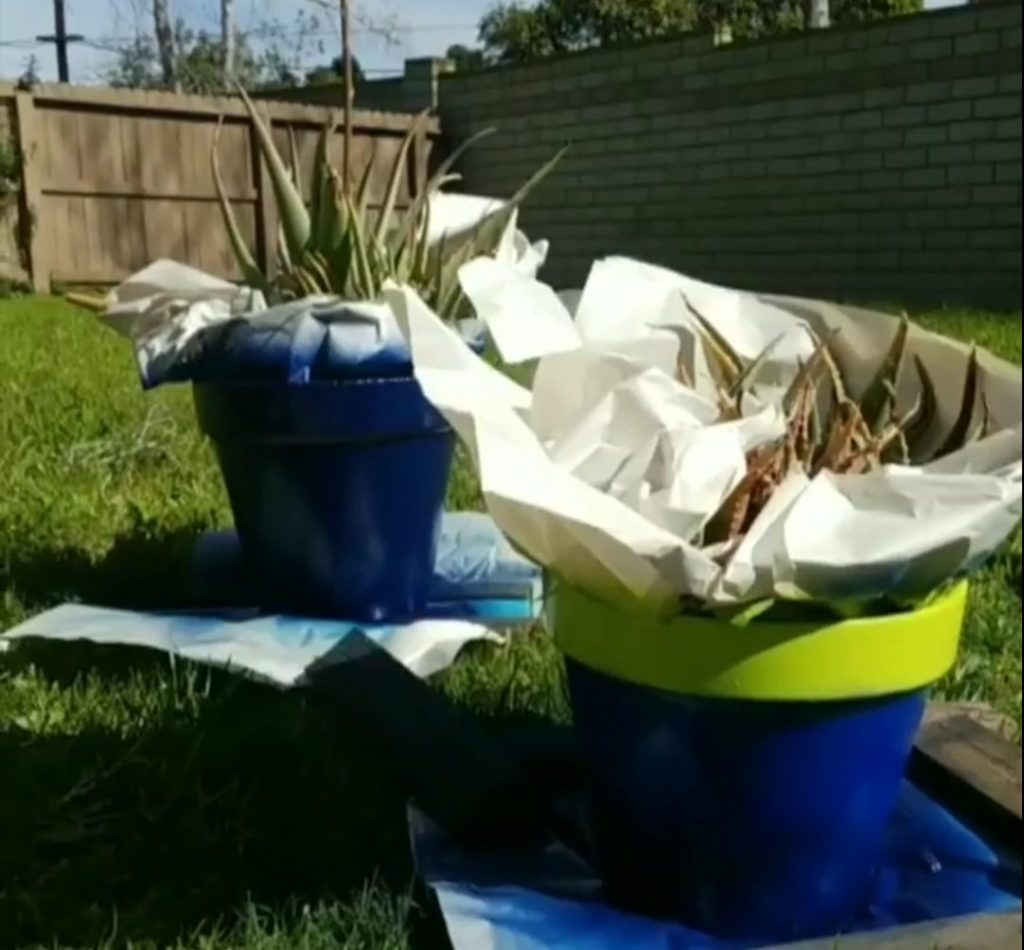 So I gently covered the aloe plants in packing paper and spray painted those pots to be lovely shades of dark blue and lime green that go with my Mexican pottery! I think they turned out pretty well. 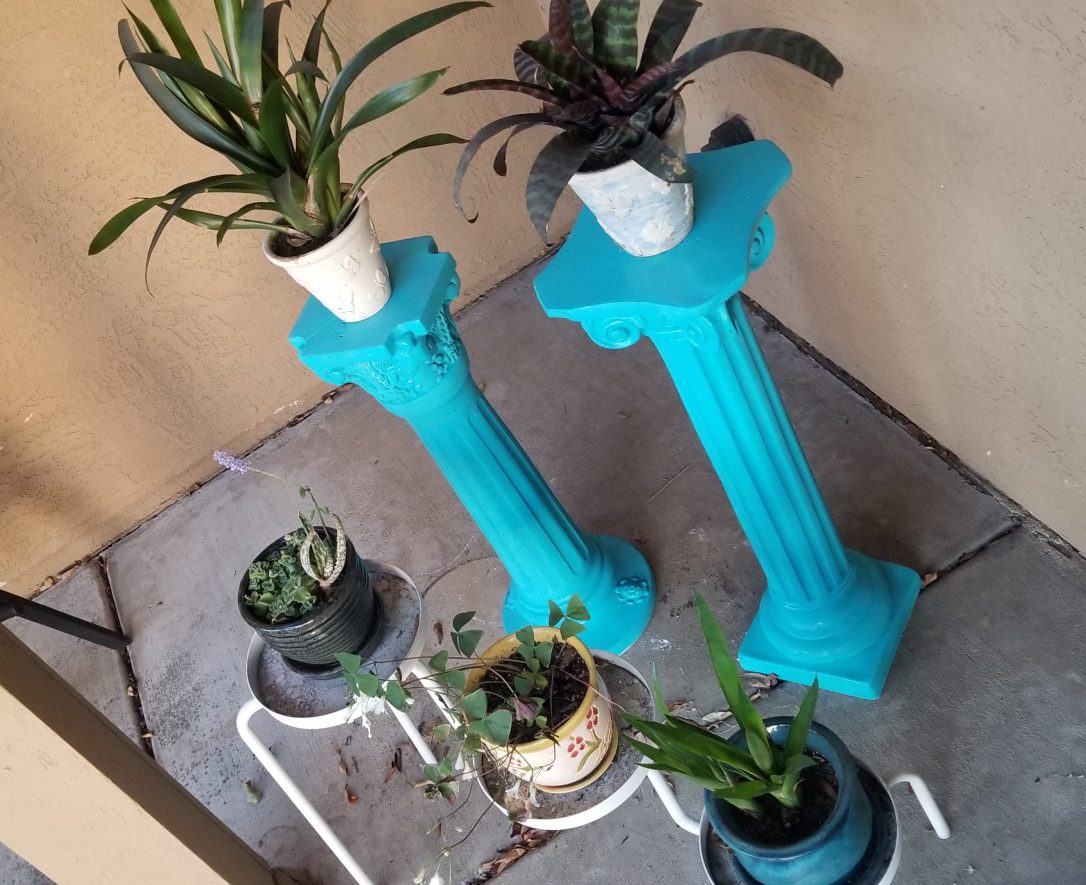 These columns came with me from Chicago and were rescued from the back alley behind our building. That sounds a little out there if you’ve never lived in a big city, but I can assure you that there are TREASURES to be found if you check beside the dumpsters in the little alleyways behind the buildings.

We had a garage in Chicago (thank goodness) and the dumpster was around the corner, so there was always something interesting back there from people moving in and out. Other alley finds included an antique end table (which I touched up and is the nicest little end table I own), window frames (given away for art), and a trifle bowl. 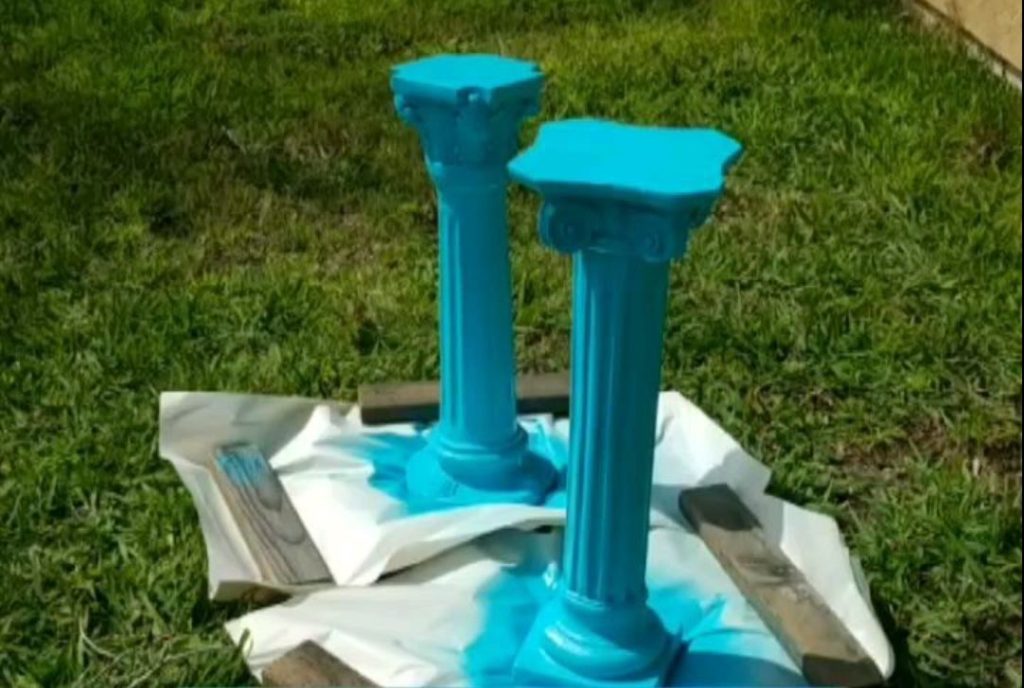 But about these columns. They clearly “go” together but aren’t matching, and were plain white and showed all kinds of dirt. They also didn’t stand out against the aforementioned mud color of my house…. so I made them teal!

Project four: TRASH CAN TOUCH UP! 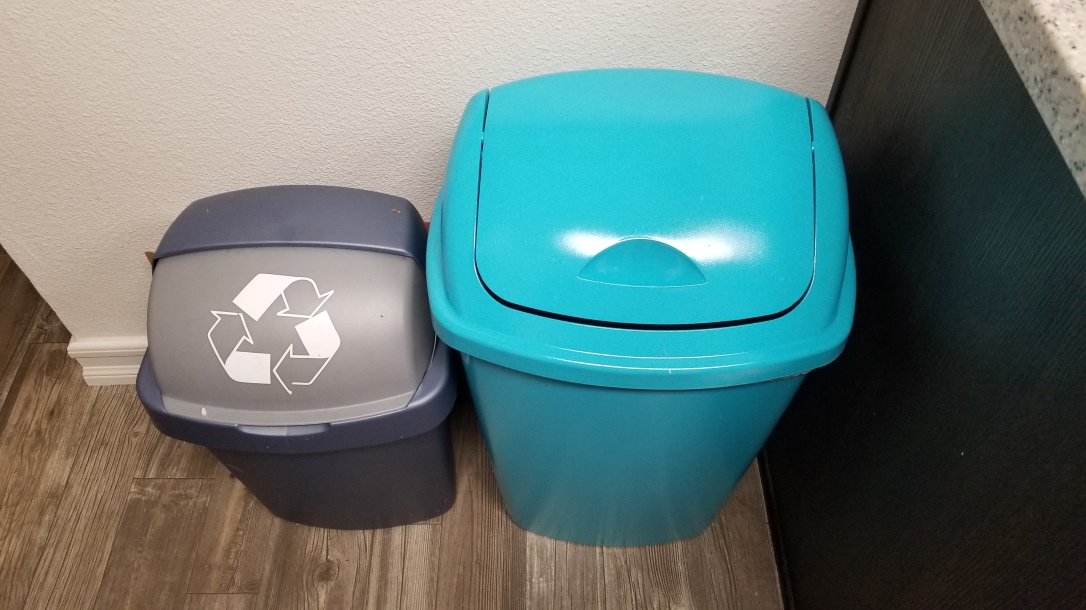 So if you’ve read this far, you know the thing I’m probably most excited about is the trash can. I’ve had this thing for YEARS. It has been BOTHERING me for years. It’s white and shows every single little stain EVER, which when talking about a trash can is a LOT over 15 years. But at the same time, it’s been sturdy, has never broken, and there is zero reason to get rid of it and add more plastic to the waste cycle. 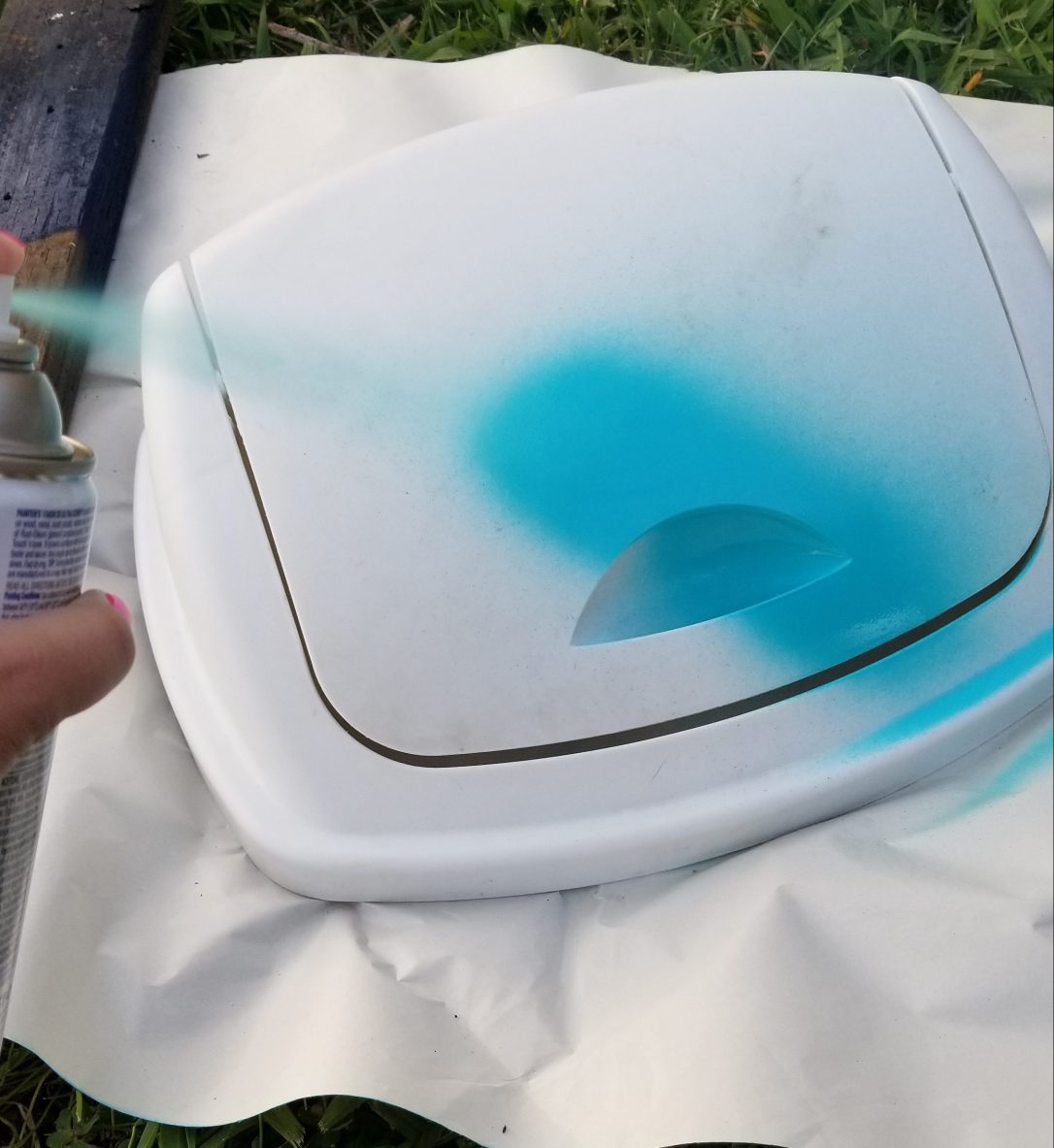 After doing all of this painting in the last few weeks, it suddenly dawned on me…..PAINT would cover all of the stains. PAINT could make it a dark enough color that stains wouldn’t even show. And PAINT would make it easier to clean.

So I grabbed the leftover teal paint from the columns and now the trashcan is a beautiful shade of teal, too!

Basically spray paint is my new favorite thing, and I’m excited to see what else I find to refresh this year with some bright, fun colors!