Early on Sunday morning we were first in line for the Willis (née Sears) Tower Skydeck. The doors opened at 8:00am and by 8:15 we were on the 103rd floor with a couple of other sailors and our families and Jared signed up for 4 more years* in the Navy.

I don’t do well with heights, but Jared wanted something specific to Chicago (and this duty station and that we couldn’t do anywhere else) so the Skydeck was it.

Re-enlistments are a lot like tiny military weddings, except that the military member is re-committing to their branch of service. You’ve got to have three elements: the sailor (in our case), an officer to perform it, and another sailor (also in our case) as witness. They’ll sign the papers, too, and make it all official (once the Navy’s had enough admin time to get it done). 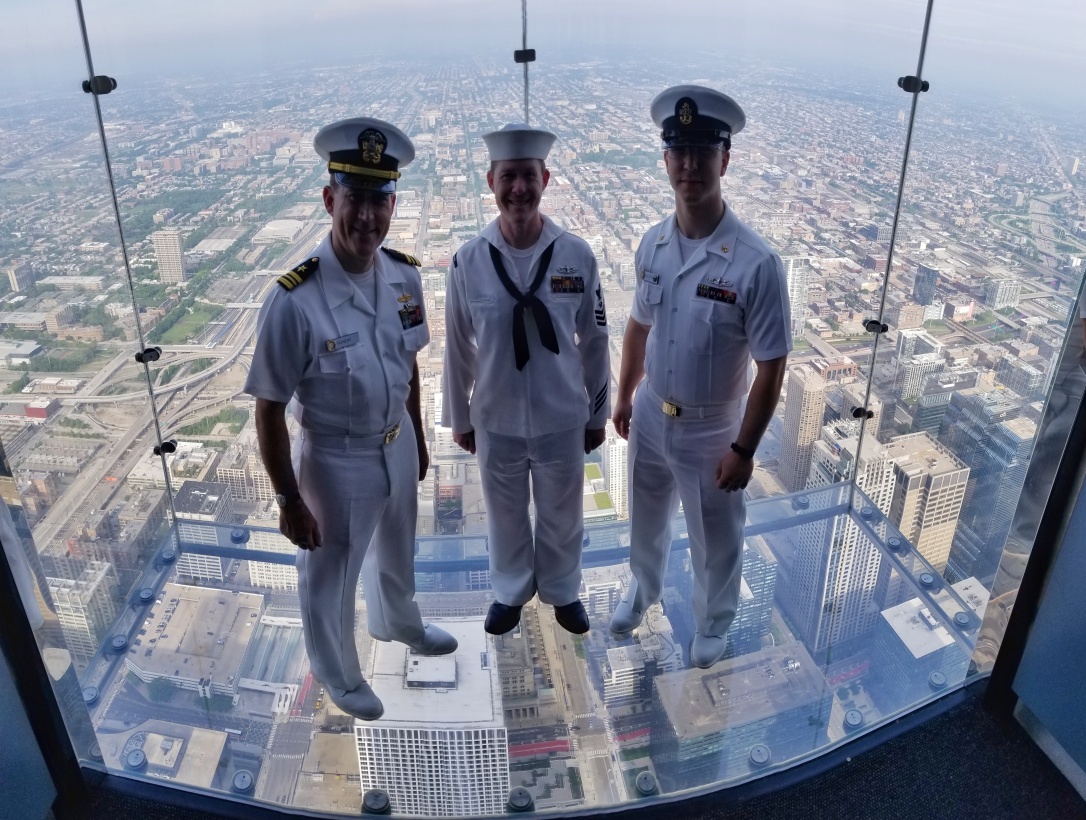 One of the things many non-enlisted/non-military folks might not realize is that the location of the ceremony is wherever the service member chooses. Within reason, anyway. And that means there have been some pretty wild places chosen. We know people who’ve had their ceremonies in the nose cones of submarines while underway, from the yardarms of their ships, on the deck of the USS Constitution, and in their own front yards. It’s just one of those little quirks that makes Navy life interesting. (Last time he re-enlisted was on the USS Missouri in Hawaii, standing under the big guns.)

That also means that, like little weddings, they can get a little pricey if you’re thinking in terms of a big event. I can tell you, though, that there are a lot of ways to make interesting or unique re-enlistment ceremonies happen. The USS Missouri, for instance, didn’t charge us at all, and was able to schedule a morning time slot for us on the day of Jared’s choice (his birthday, five years ago). Many military sites (and even some National Park sites) will work with you on this and they love supporting military members and their families. In the case of the Skydeck, if it hadn’t been a holiday weekend, we could have booked a private deck time for a pretty reasonable rate, but being that they had early hours for Memorial Day weekend, we just made sure we were there first thing.

You can also make it more like a fun picnic event, inviting the whole division to a cookout somewhere for a party to celebrate. I find that a bring-your-own thing to grill works out well because it leaves the most expensive items up to the guests, plus everyone gets to eat what they want.

All of this isn’t to say you can’t have just a simple, quick-and-done thing one day at work, either. Jared’s first was like that, with him extending an extra couple of years on his first enlistment. The ship’s galley (if you’re at sea, and even sometimes on shore duty, if you’ve got galley access) is good about making cake, though. Re-enlistments call for cake!

Anyway, Jared wanted something that was a just-Chicago thing, and it worked out that his mom and my parents were able to come, and the weather held so we could actually see and generally it was fantastic.

Obviously I’m really proud of him for reaching this point in his career, where this enlistment will take him all the way to twenty years and the possibility of full retirement (we shall see what happens in the next couple of years, though… might stay in longer), but can I just take a moment to also be really proud of myself for actually going out there on that platform with him?

As I said, I don’t do heights. This smile is a LIE (or a deep cry for help right before I scurried back to the psychological safety of the not-see-through floor). Anyway, me going out for a photo? That’s love, right there. (And a smidge of my recent efforts to face fears, and to just put myself out there and try things even when I’m scared. Deep, y’all. Deep. Except also really tall. Deep and tall? Deeptall? I’ll stop now.)

Anyway, that is done now. We survived. We had a lovely brunch and then went home and had a lovely nap (while Jared did one of his ridiculous workouts).

I guess we’ll do four more years of this Navy thing then. Here we come, 2021!

*Symbolically. Paperwork is a separate thing. Really, the best metaphor for this whole thing is a like a mini-wedding. Ceremony, paperwork, cake.