Not that I need therapy, but painting is very relaxing.

The current project is to decorate about a dozen terra-cotta pots to take to the zoo. They’re various sizes and all need to have some sort of “animal” theme, but really I’ve got a lot of leeway with them. I’ve got half of them finished and just need to add the clear coat over the top that will (I hope) make them weatherproof to go in the browse garden.

Browse garden? Well, zoos are always on tight budgets and one way to cut costs (as well as give animals added enrichment) is to grow your own browse, or produce for the animals. Browse can be sweet potato vine, edible hibiscus, flowers, herbs, and regular veggies, too. The garden by the tiger exhibit has catnip, lavender, eggplant, corn, sunflowers, bell peppers, and had collards but the plant finished its growth cycle already.

Anyway, it gives extra food (i.e. the corn can be part of the primates’ diet) or can be enrichment (i.e. extra stimuli) and also makes an otherwise unused area of the zoo look a lot nicer.

So I’m painting pots to go in the garden. 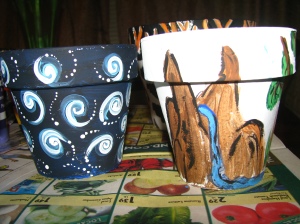 Okay, so the one with the swirlies isn’t exactly animal themed, but it looks nice anyway, don’t you think? The waterfall is the other side of the tiger-laying-down pot in the first photo. I tried to make it look like some Asian paintings I’ve seen recently. They don’t have to be amazing or anything, but it’s kind of fun to think up a new design for each one. Maybe I’ll do geckos on the next one.