Do you ever have one of those randomly wonderful weekends that you want to remember as long as possible? Yeah, that was my weekend.

It started on Friday with the surprise filming thing (see the previous entry), and things just stayed great the rest of the time. Friday night we went to dinner at one of our favorite places and the service was outstanding (as was the food, as always). In fact, we got along with the waiter so much that he was laughing and joking with us and while we drank some coffee after we finished (and had declined dessert), he randomly stopped by the table with a brownie sundae that he “dropped” on the table with a couple of spoons– surprise sundaes are the best kind of sundaes!

I was exhausted after filming all day (and being a little sunburned), so we skipped the movie we’d planned on seeing in order to get up super early for the NOAA Ocean Count on Saturday morning. The Ocean Census (or the “Great Whale Count”) was so much fun last year that I had to do it again. We saw a lot of whale activity, including a whale that breached thirteen or fourteen times in a row and one that slapped his tail on the water thirty-one times! We also saw at least two calves (hard to tell exactly– we’re mostly seeing when they breathe), and one of the calves practiced breaching with its mom. Very exciting whale stuff. I didn’t get any photos of the whales, being too busy recording what I saw. The photo at the top was the early morning view we had of the highway, though.

After the whale count, J and I went home for lunch (and to shower– it gets hot and dusty out there), then headed downtown to the Chinatown district for the Chinese New Year celebration. It’s the Year of the Rabbit this year and they had their usual big parade and festival and street foods (we definitely had noodles and coconut jin deui— yum!), including the lion and dragons dancers I like so much. 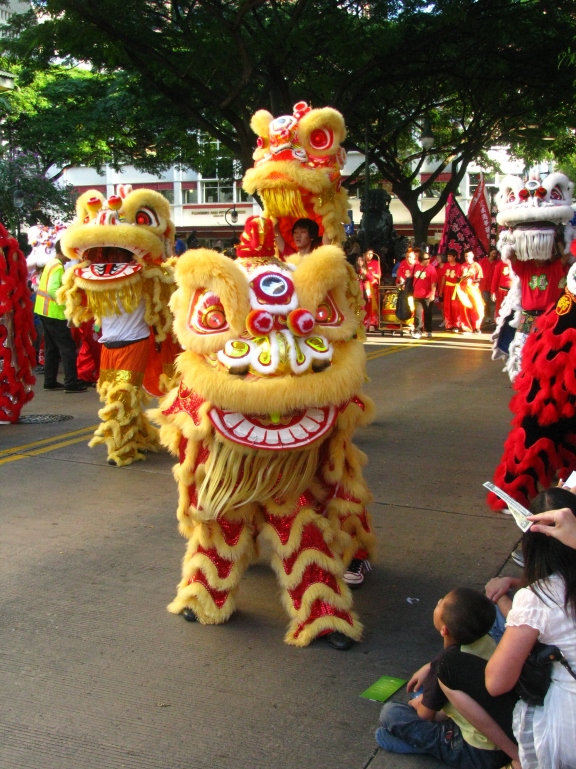 We spent the afternoon and early evening wandering the festival and enjoying the music and art (and people watching), before heading to the theater to see True Grit. I have to say that it was a really excellent movie and (except for the crying baby and squirmy children in a family down front– who brings kids to movies like this one??) I got thoroughly caught up in it. If you haven’t seen it, it’s based on a book and a sort of remake of a John Wayne movie, but it the rough and tumble cowboy movie you don’t see in theaters much anymore. Oh, and of course I cried when one of the horses died.

Today’s been restful and a little lazy, which I needed after the business of the last couple of days. So all in all, it’s been a really excellent weekend.

[update]
So I just got emails from WordPress (the site that hosts my site and my layout and everything) asking me to approve comments… and it turns out it was asking me to approve the LINKS to MY OWN ARTICLES. From the SAME BLOG. I approved myself (wow, redundant!), and now it’s telling me that it is confused and will have to try and approve those links again in eleven minutes.

Dear WordPress: I shouldn’t have to approve MY OWN LINKS to MY OWN ENTRIES on MY OWN WEBSITE. I’m just sayin’.