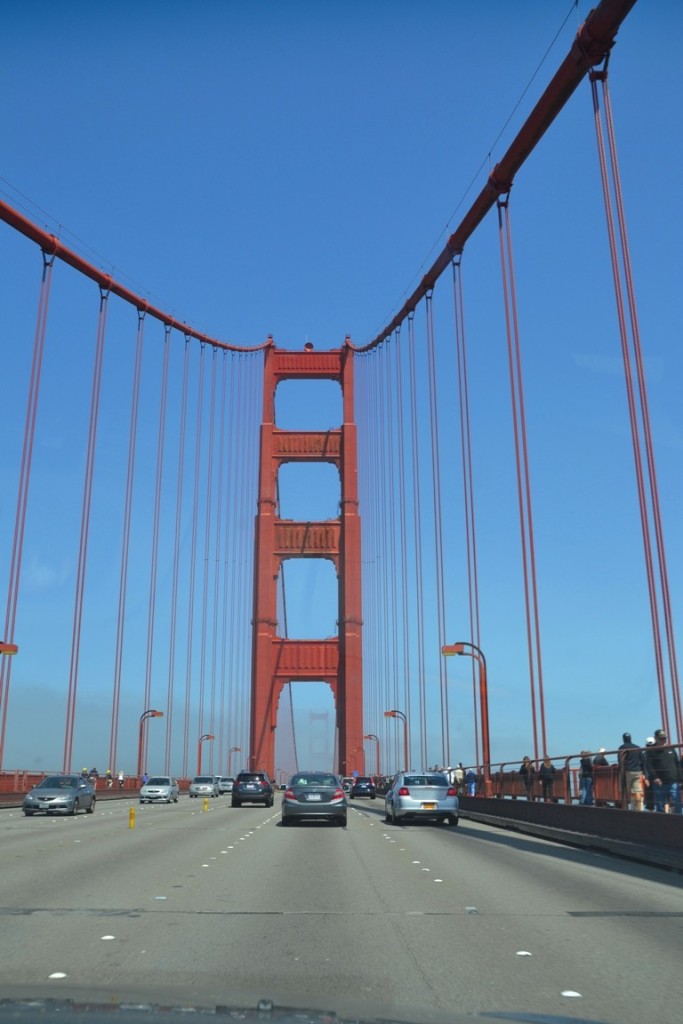 The day after our visit to Monterey, J and I continued up the coast to San Francisco. Since we were so close and we’d both always wanted to visit, we couldn’t resist. We picked a destination (the Muir Woods, but I’ll get to that next) and headed north. In less than two hours, we found ourselves driving right across the Golden Gate Bridge.

Muir Woods is a national monument and park with some of the southern-most redwoods in California. They aren’t the massively wide variety you find way up north, but they are massively tall. It’s hard to describe the size of them, and only slightly less hard to photograph the size of them, but I did try. You’ll see J standing in the middle of the wooden trail for a reference point. Muir Woods is also where the UN met to memorialize FDR’s death; he’d used the forest as an example of the value of national parks, and to show the potential for them. Many of the trees look much the same in photos from that era as they do today.

I suppose part of the reason the trees didn’t seem all that wide was the sheer height of them by comparison, though obviously a very tall tree needs a very wide trunk to support it. This trunk is hollow in the middle, and rubbed smooth by the generations of park visitors running their hands across the bark. Because of this, it’s one of the only trees you’re actually allowed to touch. 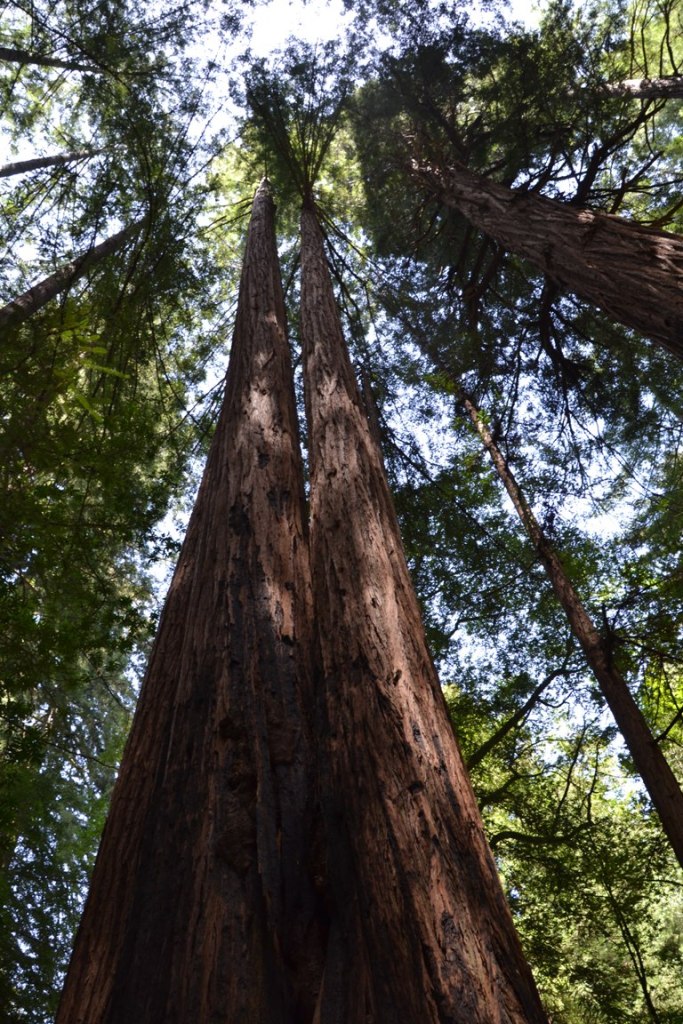 The trees tower overhead, some of them in circles around a dead stump, the new generation of already ancient forests. I was fascinated by the bark that seemed to be folded into long strips along the trees, sometimes looking like stripes, and by the vividness of the red wood. We only did the short (two mile) round trip hike, and I’d like to go back and explore the area more.

From the Muir Woods, we drove back down to the Golden Gate Bridge National Parks area. Turns out there are a lot of national parks (and therefore a lot of places to get my passport book stamped!) It includes the bridge itself, Fort Point (a Civil War-era fort beneath the bridge), a warming hut, a wildlife area, all sorts of things. We only got a visit a few and at a very quick pace*, but it was worth it.

Fort Point was one of the best areas, and also one of the least crowded. The signage wasn’t fantastic and we weren’t even sure it was open, so were happy to discover not only could we walk around the inside of it, but it had a lot of great exhibits. The Fort is directly under one end of the Bridge (as you can see) and also has a lighthouse (which you can also see) and a nice collection of canon.

The inside of the Fort is in remarkable shape, and there are exhibits and classrooms on all of the levels, so it’s definitely worth a visit if you’re in the area. There are also nice views of Alcatraz and the coast from the top of the wall, accessible via a spiral staircase.

By this time, we were getting hungry so we headed back down to the pier area. There are several active piers (for cruise ships and fishing boats and the like) but several have become restaurant a shopping areas, including Fisherman’s Wharf. We walked a bit of the area but quickly settled on a place to eat dinner and were rewarded with awesome views of the water. After dinner we were able to walk down through the shops and see better views of Alcatraz as well as more sea lions, the Bridge in the distance, and other iconic sights. 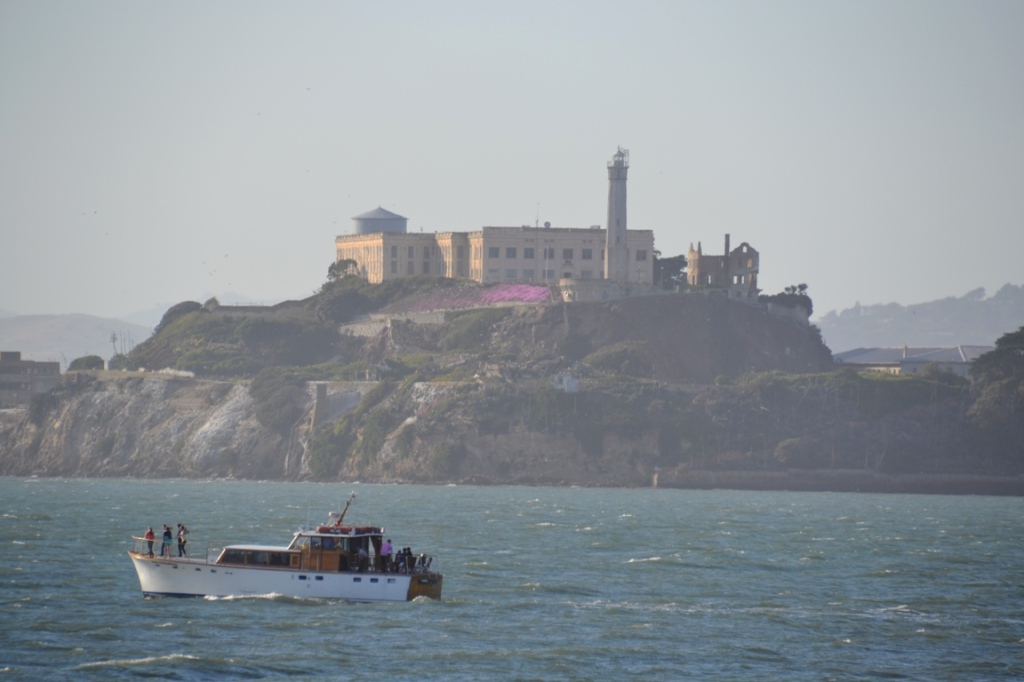 Alcatraz sits in the middle of the bay and is a lot more colorful than I imagined. See the purple wildflowers on the hill? The day was sunny and clear and we were able to see a lot, which is unusual for this time of year. 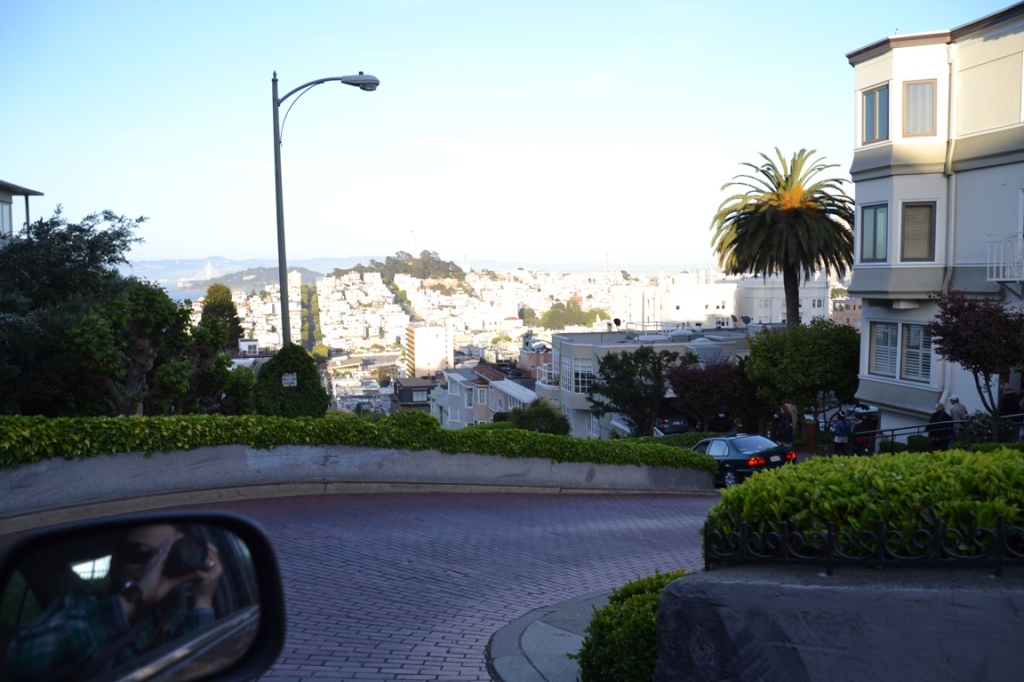 On the way out of town, we crossed an intersection with Lombard Street, so we took a short detour to drive down the winding block that is so famous. The view from this street is gorgeous, and it’s nestled in rose gardens with the houses on either side. J and I both got a kick out of the little drive, and then hit the road toward home.

San Francisco will definitely need another visit, there was just too much to see in one day, but I feel like we gave it our best shot. We even bought a round loaf of sourdough bread for the ride home.

*It takes SEVEN HOURS to get home from San Francisco, which is fine for a weekend, but if the day gets away from you… LONG NIGHT OF DRIVING.

1 thought on “San Francisco and the Muir Woods”