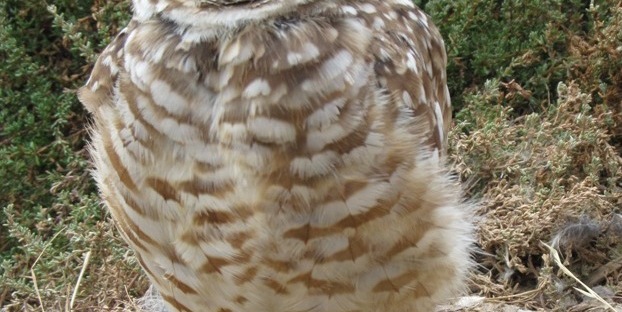 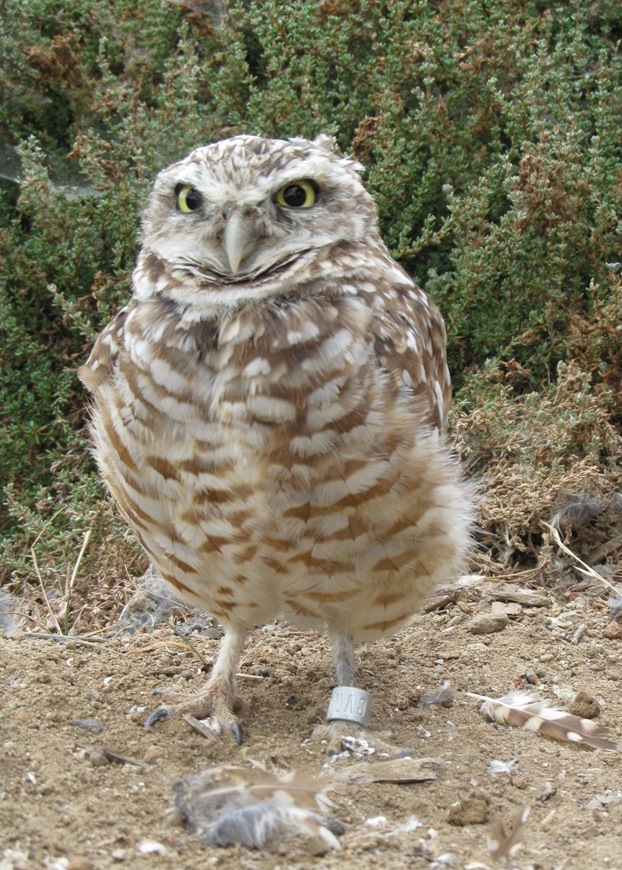 Ever since I read Hoot by Carl Hiaasen, I’ve been kind of fascinated by these little birds of prey. This burrowing owl is from the Living Coast Discovery Center and is part of a colony they have on exhibit there. They eat insects and small mammals, or small reptiles and amphibians they find. One interesting thing I learned about them is that they actually nest in burrows made by other animals, such as ground squirrels, which are very common here. They hunt by running along the ground (which I would SO love to see, with those little legs scooting along) or by swooping and grabbing things (like insects) from the air.

Burrowing owls are locally (in Orange and San Diego Counties) almost extinct, other than a tiny population on a Navy base. The Orange County base recently started bolstering protection for the owls, which are the only nesting owls in this part of the state that anyone has found, and they are very close to another endangered species (least terns) right on the base. It’ll be interesting to see how this plays out, as the terns are naturally snack food for burrowing owls.

There are over twenty subspecies of burrowing owls, including the Floridian one made famous by Hoot. They used to be common all over the US but since their territory is also prime land for development (wide open areas with sparse vegetation), they are running out of places to breed in localized areas. You can read more about them at the Burrowing Owl Conservation Network site.

Personally I think they are ridiculously cute, with their fluffy bodies and long, skinny legs and I’d love to see one in the wild. I’ll add it to by California bucket list. ^_^

Spring bee friends are so cute. 🐝 #beefriends
Headstand bee friend. 🐝
More spring. 🌸🌸🌸
I found spring. 🌸🌸🌸
Seagull woes aside, it was a good afternoon.
Last weekend we celebrated the end of our #sdzgaip masters journeys at the @sdzsafaripark and I know we took a ton of photos but this one's my favorite. (I've got one semester to go, woo hoo!) #advancedinquiryprogram #projectdragonfly
There are worse ways to raise money for charity. 😉
One more for good measure.
Another year, another photo booth. (Deployment schedules mean holiday parties in January but I'm not mad.)