Here there be Spoilers, Sweetie.

Welcome back to Asgard! In Thor: The Dark World, we return to find Loki (Tom Hiddleston) facing judgement and Thor (hellooo, Chris Hemsworth!) in the midst of battle, swinging his hammer through hordes of baddies, or sometimes just the big rock troll baddie. He’s still got his posse of friends around him, including the lovely Sif (Jamie Alexander), who can pack a wallop on her own, thank you very much, and they triumph over all the remaining pockets of badness that’s been plaguing Asgard since Loki unleashed it, I guess. Triumphant, they celebrate, but Thor is distracted. No surprise there, he didn’t even get to see his friend Jane Foster (Natalie Portman) when he came to help the Avengers protect New York. We find out later it’s been two Earth years, who knows how long it’s been in Asgardian time?

Speaking of time, Thor’s hair keeps on getting longer. So does Loki’s, actually. I know they live a long time, but have they both decided the flowing locks are in this year?

Speaking of Jane, she’s having a hard time moving on with her life. She’s in London but not working, her research being done by the spunky Darcy (Kat Dennings) and an intern named Ian (Jonathan Howard) who seems bemused by the strange things his employers get up to, but doesn’t seem to ask too many questions, though this possibly has something to do with the aforementioned Darcy. Anyway, the point is that the only thing that rouses Jane from her moping is when Darcy finds an anomaly similar to when they found a certain hammer. They investigate, things get weird, and Jane winds up going through a wormhole type thing and getting infected with pure liquid evil red goo. She winds up back where she started in London but hours later, and finds Thor is there looking for her. The evil goo inside her does some weird stuff so Thor whisks her off to Asgard, which I suspect he’s been looking for a reason to do for the last two years anyway.

As it turns out, the evil red goo has awakened the ancient (and supposedly extinct) Dark Elves, led by Malekith (Christopher Eccleston, who is unrecognizable and excellent), and they follow it to Asgard to take it out of Jane and plunge the entire universe into darkness.

So there we have the movie title. The rest of the movie is spent trying to keep them from getting Jane, and therefore the goo (actually called aether, but I do like calling it evil goo), and then (once they, predictably, get the goo) stopping Malekith from unleashing DARKNESS, which apparently can only be done from Greenwich, England. Seriously. 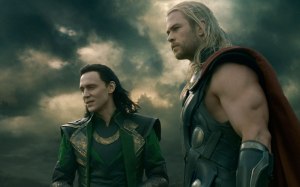 What little character development that happens in this movie is on the part of Thor himself. He loses someone close to him, and must call upon Loki to help him break the rules in order to do what needs to be done. Loki is, of course, the master of deception but goes along with it due to a shared yearning for vengeance. Tom Hiddleston is, as always, excellent in his role. One of my favorite scenes involves him using his illusions to really toy with Thor, though I suspect he’s also just SO excited to be out of prison and walking around that he’s having a bit of fun because just because he can. He is Loki, after all. We all know that Loki is also one for playing the long game, so keep expecting his trickery, and don’t believe quite everything you see with him.

Thor does find it in himself to be the ultimate hero, not just of Earth and Asgard, but of all the Realms, but the cost is knowledge of himself. He faces what it means to be king and doesn’t much like what he sees.

Things that puzzled me included Jane’s research team. While they made sense in the first movie, they seemed (despite how entertaining Darcy is for a one-liner) a little redundant. Their part in the climax could have been accomplished just as easily with technology that already exists in the movie itself, so did we really need the extra bit from the human characters? Honestly, they didn’t have much to do with anything except as a bit of comic relief. I also found that the terrifying evil seemed of much less immediate concern than the relationships in the movie, though you’d think the end of the universe as we know it would be pretty concerning.

But really, the characters were the best thing about this movie. The action scenes were a lot of fun, Thor was being Thor at his best, and the comic relief made it a whole lot of fun. One of the best scenes happens during the climatic final battle, and involves the London Underground. It made me really laugh out loud. And really the characters in this movie are all on point, so the timing and setup of these things is spot on.

Overall this was a solid superhero movie and I had a lot of fun watching it, which is, after all, the point of this type of movie. It had a lot of fun moments and the characters really shone. It’s definitely a watch-again movie.

And if you go see it, this is IMPORTANT: there are TWO extra endings to this movie. The first is where you’d expect it, after the primary credits, and is setting up the next Avengers movie I’m sure. The second is at the very end, and really just a happy note to end. Be sure to see them both.

1 thought on “Movie Commentary: Thoughts on Thor, the Dark World”