Thoughts on The Desolation of Smaug… A small hobbity commentary 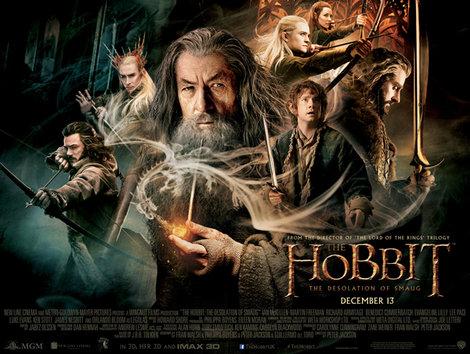 I saw The Hobbit: Desolation of Smaug this weekend and here are some of my thoughts on it, slightly out of order and really just as they occur to me. My full review can be found here.

1) While I don’t generally mind changes in book-to-movie adaptations, I feel like this movie was strongest when it rang true to the book and weakest where the deviations were strongest.

2) I really like Tauriel as a character. It makes sense to have specific elves present and I like having a female character in an otherwise completely male cast. When they retread Arwen’s healing skills with her (and reduce her to a love triangle) I think it’s a detriment to her as a character.

3) It makes perfect sense for us to see Legolas in the movie, seeing as his dad is so prominent in the story.

4) Much as I love Beorn… He could’ve been completely cut. We either needed to slow down and have some sort of plot point at Beorn’s house, or the dwarves could’ve just run for the forest and been done with it. As it was, the whole thing felt rushed and extra.

5) I do not understand how a. Thorin wasn’t burned to death sitting on a metal cart in molten gold and then b. still expected the dragon to be killed by it. Logical fallacy at best.

6) Bilbo’s reactions to the Ring are wonderful! Especially the details about being able to understand the spiders’ speech while wearing it.

7) Smaug was amazing. The film-makers completely did him justice and despite the logical issues in the molten gold scene, he still comes off the better for it. Who’d have guessed the dragon would be my favorite part?

8) Laketown was, I think, perfect as a set. Well, until the orcs and elves turned up, that is.

9) Story wise, I think the loss of the people’s enthusiasm for the dwarves could make the dragon attack less poignant. I could be wrong, as that’s the next movie.

10) Other than justifying the orcs and elves in Laketown (which as I’ve said I didn’t like anyway), I can’t think of any reason for the four dwarves to be left behind. I’m honestly expected to believe that after ALL of the things they’ve experienced together, those four wouldn’t at least try to follow? I get that Kili is injured…but it bothers me.

11) I really like getting to see what Gandalf is doing when he continually leaves the dwarves on their own, and it sets up the events in LotR better.

As I’ve said before, this was a very good action/fantasy film and I’m sure critics will like it better because it’s faster paced (which is the trend right now). It may be a really good action movie, but it’s very bad Tolkien. I’ll have to go see it again and find out how I react when the surprises are gone and I’m just watching it as a movie, see what I notice. And it may be that the extended edition fixes many of my complaints with the breakneck pacing and lack of plot point at Beorn’s house.

So there we go. Random thoughts on DoS.