On Monday we got a surprise snowing here in Chicago. At first when I was up at 4:30 with J to bid him goodbye for the day (and goodnight because I certainly don’t actually get up that early) I was irritated. Then when I got up for the day finally I wasn’t sure how I felt about it anymore and spent a good chunk of the morning staring out the window. This was how my day kind of went. 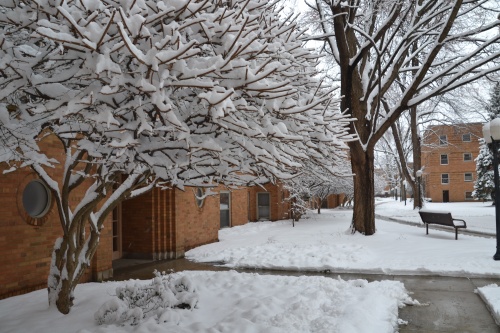 And so the morning progressed. The snow started again, and fell thicker and thicker, to the point where it looked like we might even get completely buried.

10:29am: Huddle by fireplace. Stare out window at stupid snow.
12:34pm: Eat lunch. Stare out window at stupid snow.
1:23pm: Suddenly remember I have a macro lens. Dig parka out of closet where I stuffed it on the first day of spring because I’m done participating in winter, pull on snowboots, run outside like a weirdo and start flailing around taking pictures of snowflakes.

1:58pm: Remember I have a box of fairy doors that would also be fun to photograph in snow. Run back upstairs and pack up a waterproof bag of Tiny Things including the little doors and run back outside.

I’m only putting a handful of them here, but they are a general representation. I tried a few different methods, too, including catching them on a plastic bag, which you can see above. The flakes themselves were fairly huge but melted quickly because of the warm air.

This one was one of my favorites, by far. Another plastic bag catch, and didn’t last long, but I liked the way the edges looked.

You can see how light and fluffy the snow was in this one, just lots of little flakes piling up in a geometric sort of way. Much less solid than I expected.

This shows you how big the flakes really were. You can see an individual one on my glove! 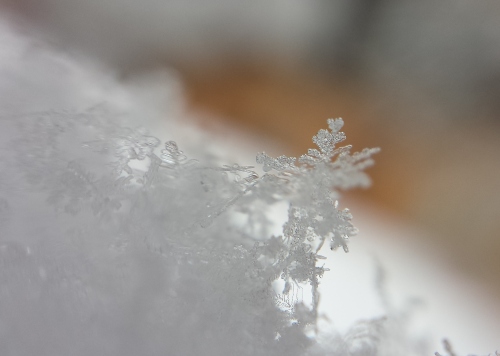 This one reminded me of those little magnetic building pieces kids use. I forget what they’re called, but the snowflakes built themselves up just like that.

So there’s a tiny peek at some tiny frozen water bits. I will post fairy door pictures another day, because they were fun to photograph, too. As of today most of the snow is melted (much to my relief) so I’m glad I grabbed the opportunity when I had it.