We moved into our house in California back in late December, and Jared checked into his new command in early January, and in theory he was supposed to get 10 days to help get the house set up and us settled, but the Navy being what it is, he got to take his leave in….March.

Handily enough, I also had spring break in March so we lined the dates up and took a fantastic 10 day staycation in southern California, because sleeping at home and driving a little further is cheaper than flights and hotels. I won’t go into all the details, but here are some of the highlights! I might make more detailed posts about some of the individual outings (like the Food & Wine festival) in the next couple of weeks, but no promises. 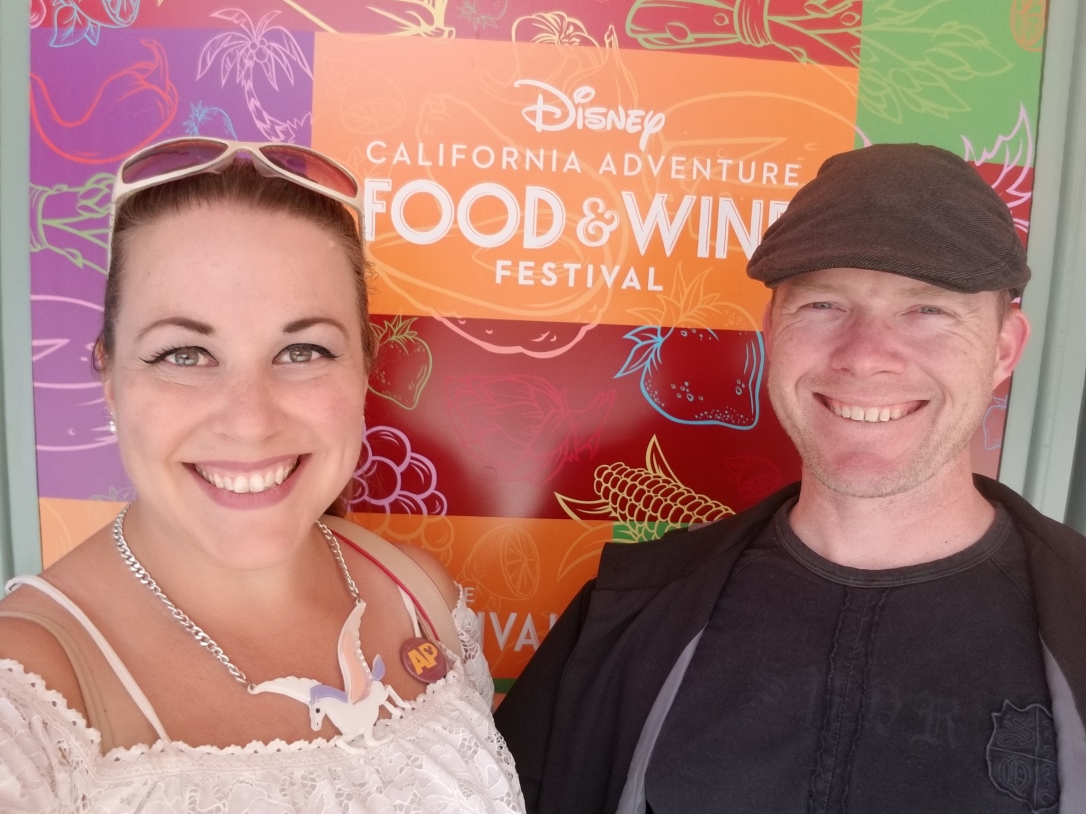 I’ve done the EPCOT version of this, which takes place in the fall and involves a lot of international fare around the World Showcase, but the DCA Food & Wine Festival centers on California-grown products and flavors, which is a really neat idea.

Each stand focused on a region or specific ingredient, such as avocado (avocado ice cream was interesting, and the flavor grew on me), citrus (lemon ginger mules and orange chicken), or strawberries (strawberry frushi was wholly new to me and soooo good). We had a great time, and between lunch and dinner managed to try everything we wanted to from the lineup. 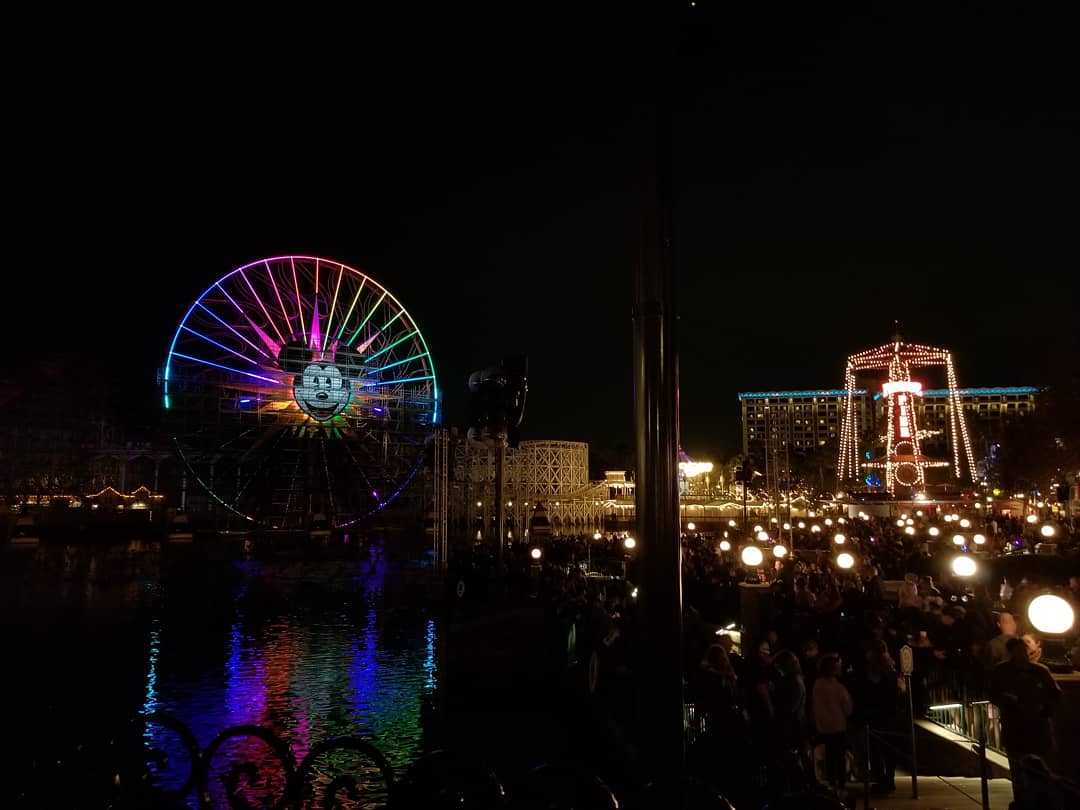 And since it was a vacation week, we stayed for World of Color, the DCA nighttime water and light show! We don’t often stay that late as it begins around 9:45pm and we were driving home, but it was fun. 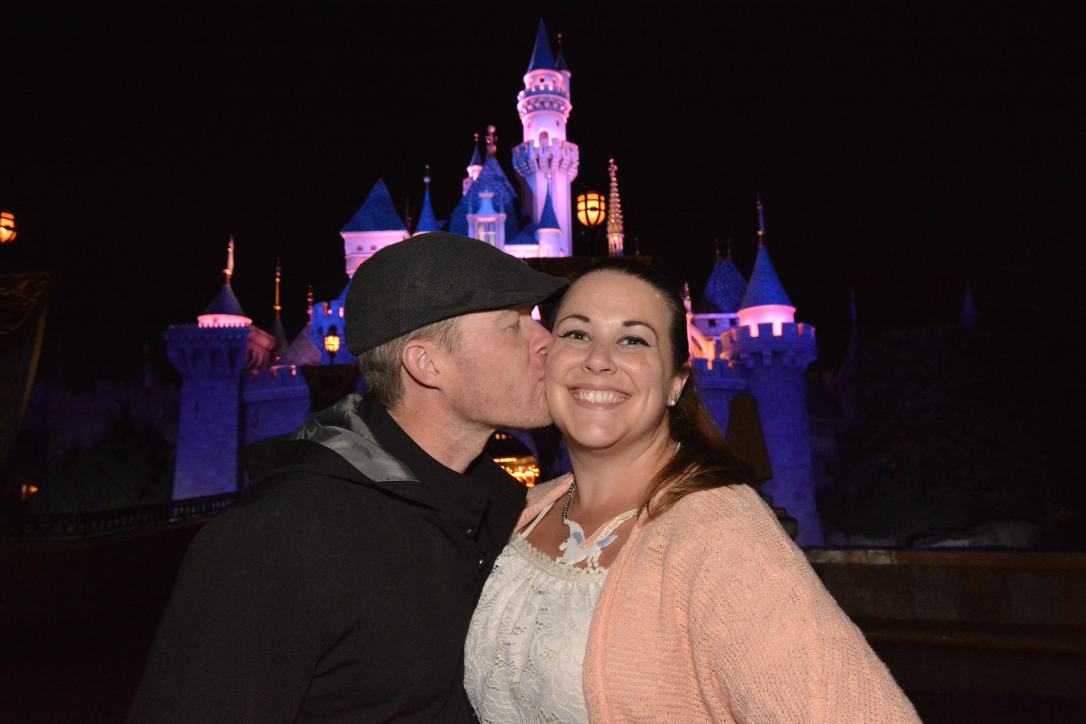 And afterwards because most people had gone home, we hit up our favorite rides that had too-long lines during the day. Nothing like walking straight onto Big Thunder Mountain Railroad and riding it in the dark! 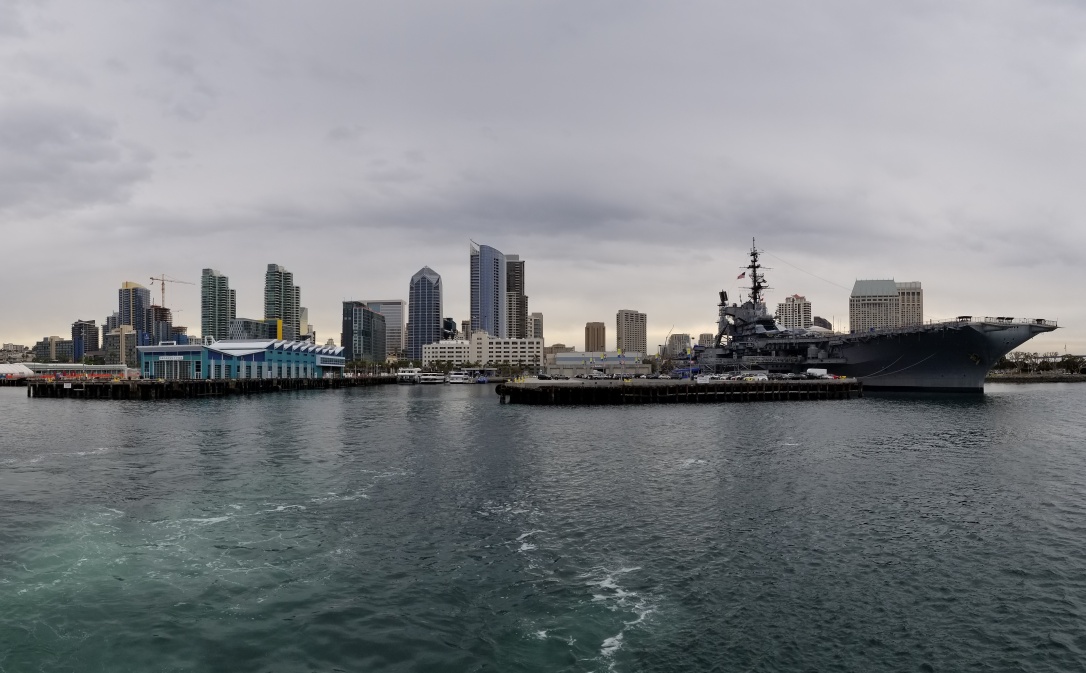 One of the things I miss about Hawaii is the proximity to whales. They are here, of course– gray and blue whales have migration patterns that take them past the southern California coastline– but you don’t usually just look out and see them. 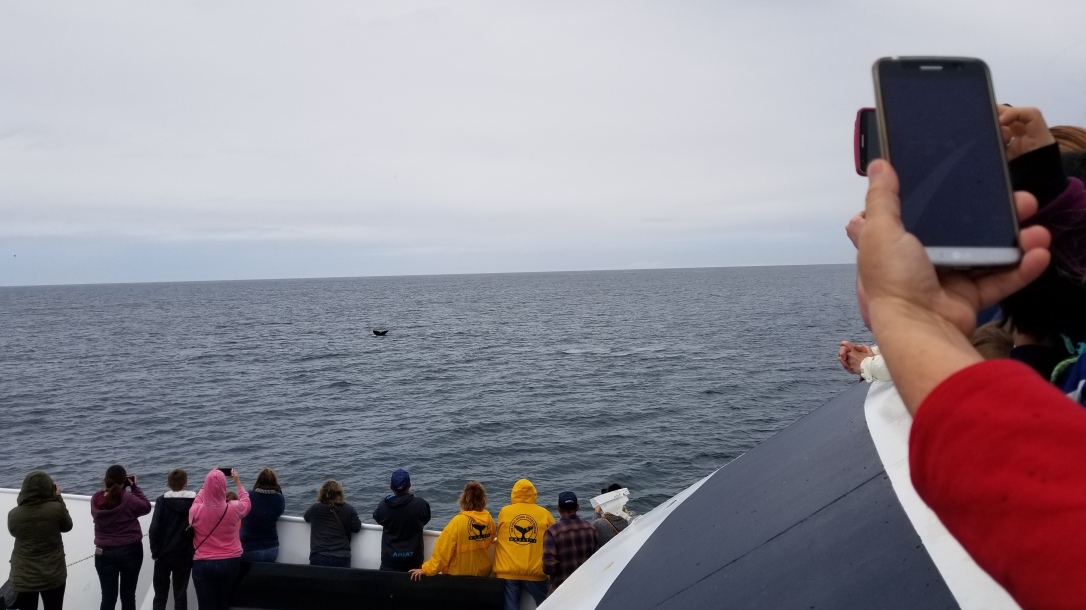 Since it’s gray whale migration season, we scheduled a whale watching trip out of San Diego harbor for an overcast morning in the middle of the week, and were rewarded with four gray whales! They were huge, and moving northward as a group. 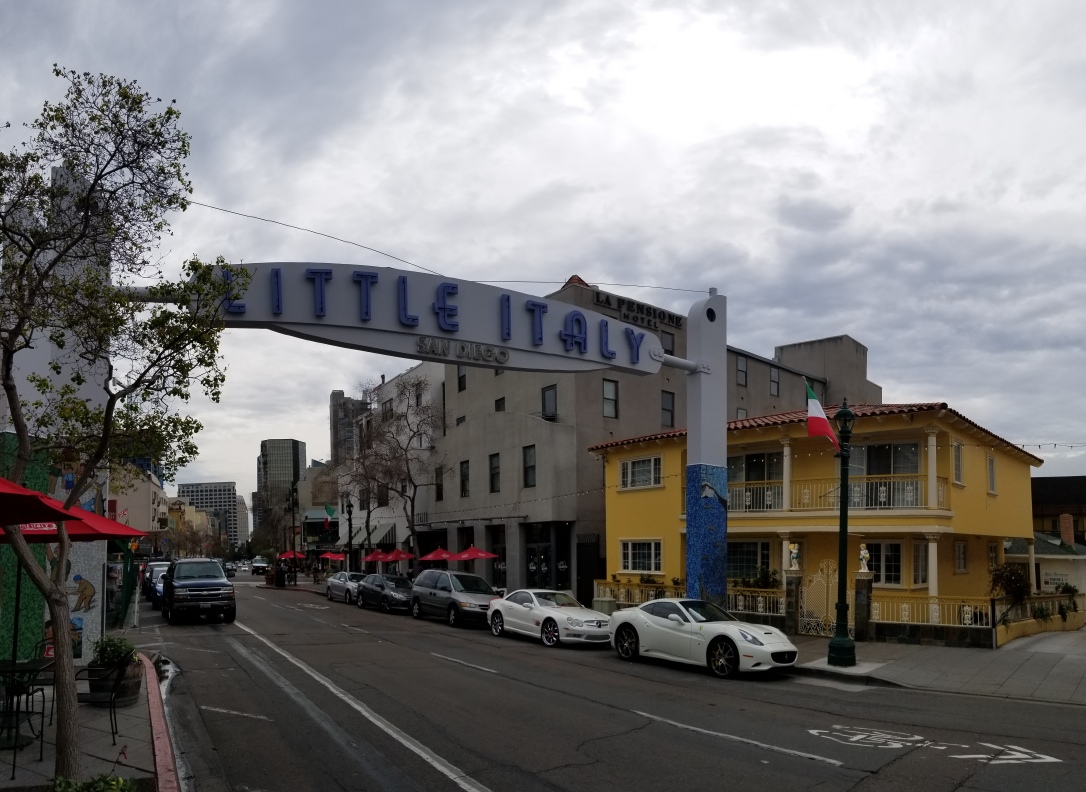 After whale watching, we hung out in the Little Italy neighborhood of San Diego. This area was settled by Italian immigrants who came for the tuna fishing, and the buildings retain much of the charm of the historic neighborhood. 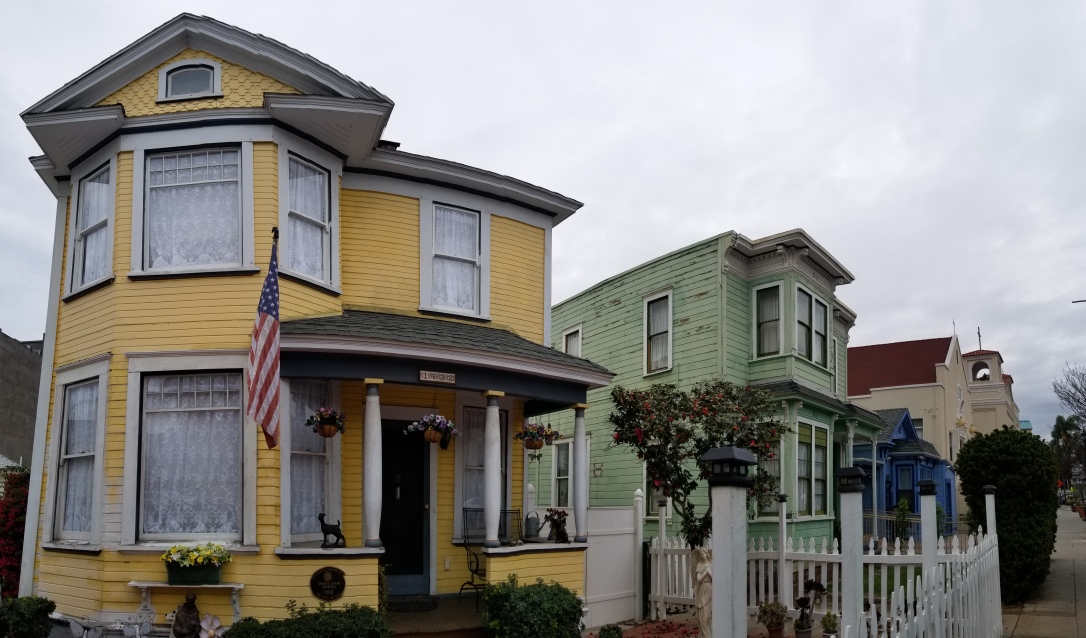 There is also plenty of good food, and we had amazing pasta followed by gelato and sightseeing. The Catholic church there is particularly beautiful, and open to peek inside of during the week (when there isn’t a service). 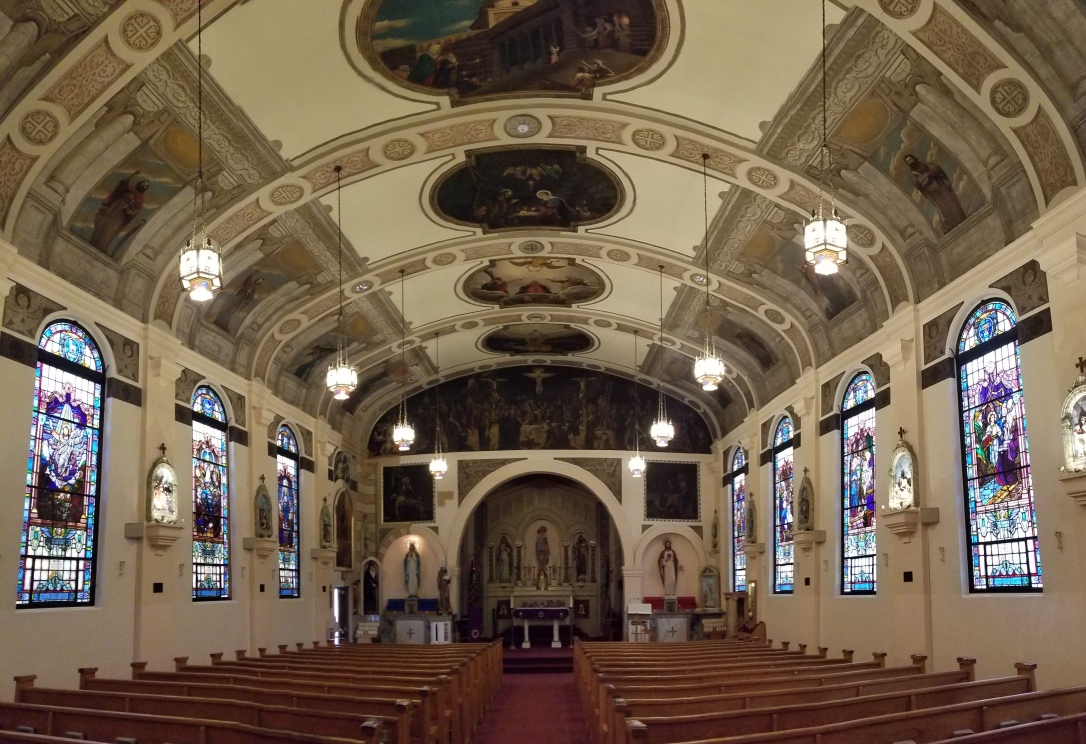 Universal Studios Hollywood and the Wizarding World of Harry Potter

Neither of us had been to Universal Studios Hollywood before, though we’d been to the theme park in Orlando a few times. One of the things that struck me about the Hollywood location is that it is actually at the studio, and that it grew out of the old studio tours that began over 100 years ago, in 1915. 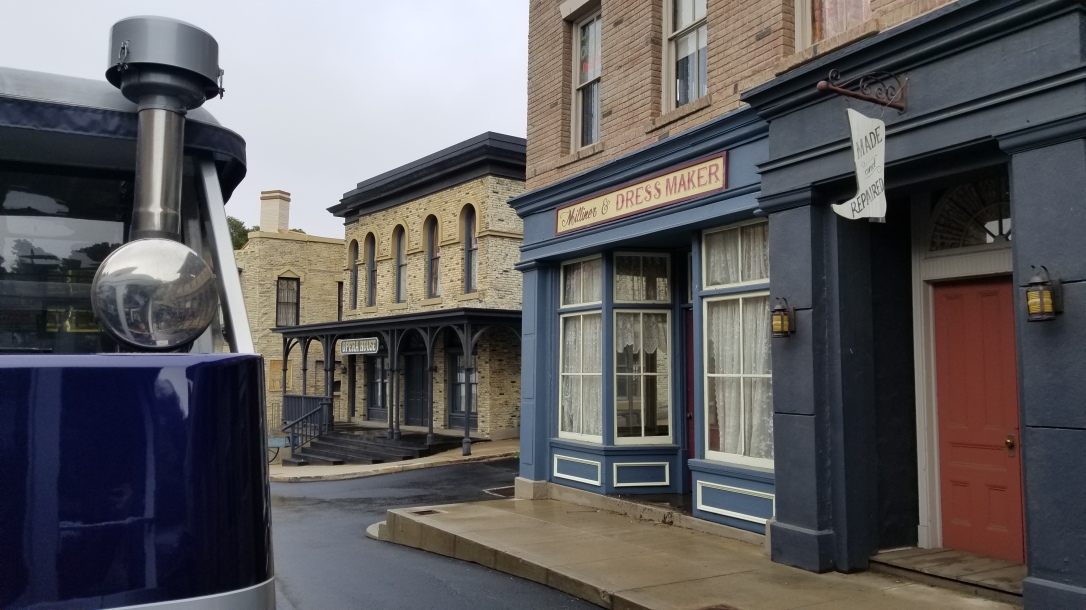 You can still go on the studio tour and see the back lots they use to create places like “New York City” or “London” or even “Whoville” from the Grinch, among other places. 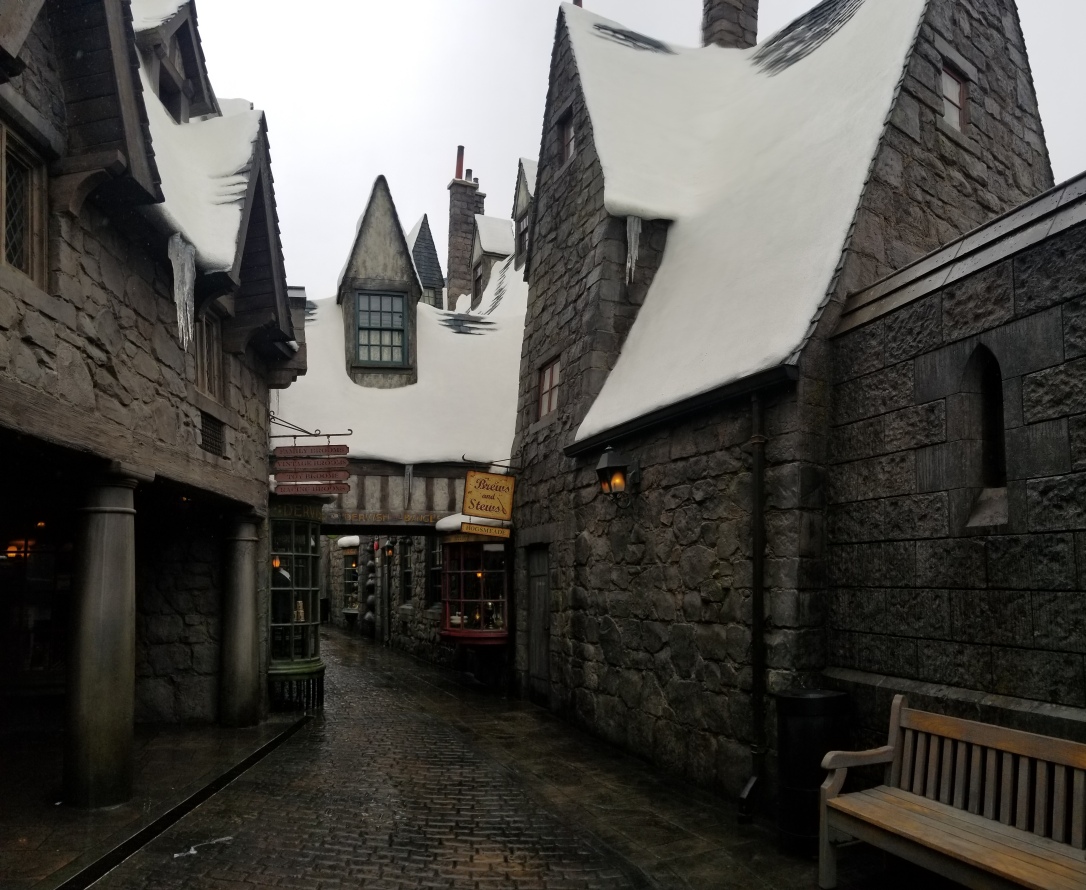 And, of course, the theme park is now home to the second installation of the Wizarding World of Harry Potter. This park has the smaller Hogsmeade area, just like the first part added in Orlando. (There are rumors that started before this part of the park even opened in 2014 of a Diagon Alley expansion but I’ve not been able to find any firm confirmation of it. I wouldn’t doubt it, though– Harry Potter is probably one of their most marketable theme park experiences, and is the best park of their theme parks in terms of immersion and overall experience.) 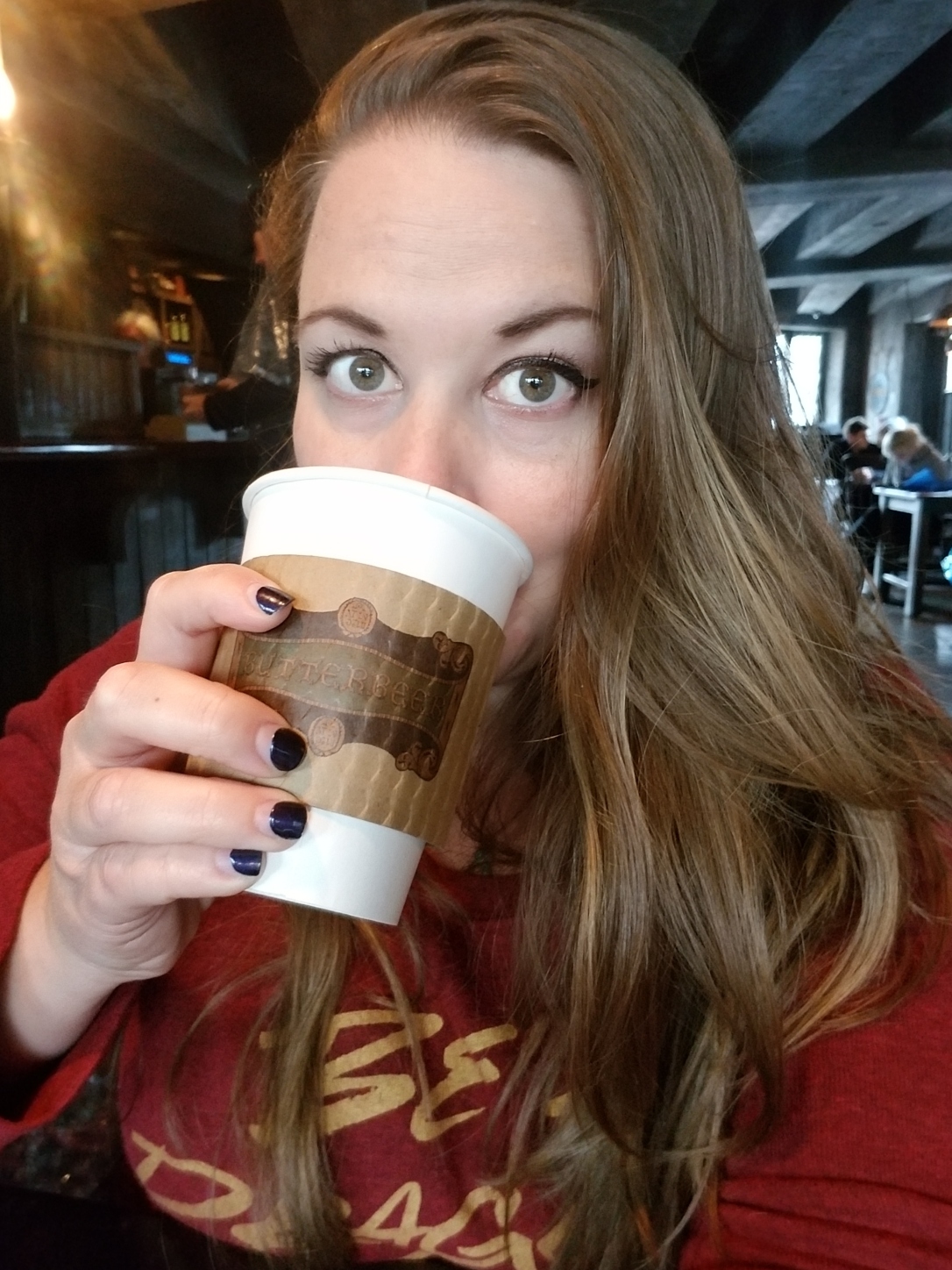 We enjoyed our afternoon in Hogsmeade in an ongoing drizzle, which was nice because it kept the crowds to a minimum and left us with much of the “village” to ourselves. And I can confirm that hot butterbeer is the superior version of the 3 they sell, especially on a cool, rainy day. 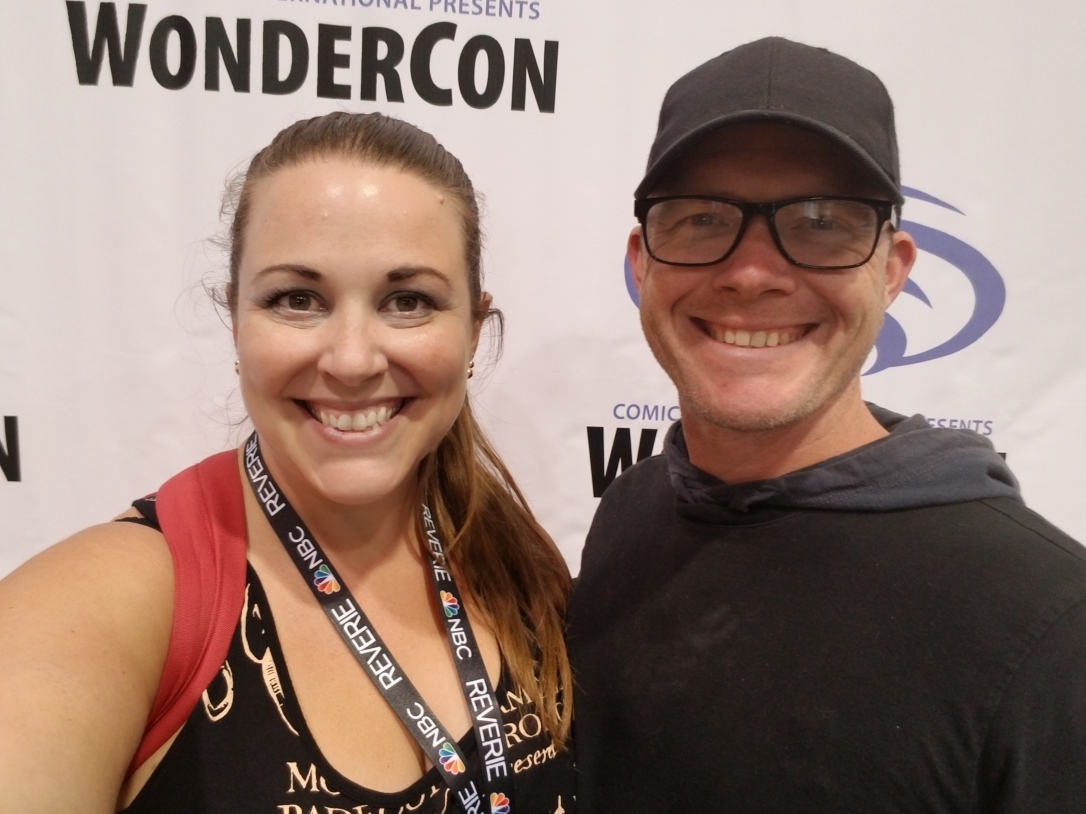 We capped off our staycation week with a weekend in Anaheim for WonderCon 2018. WonderCon is produced by Comic-Con International, the company who puts on San Diego Comic-Con in the summer, and is I suspect what SDCC used to be about ten or fifteen years ago. That is to say that it’s large (with an exhibit hall floor of a similar footprint to SDCC) and brings in some well-known faces in both comics and general pop-culture, but is still small enough that everything feels accessible. We were able to make it into every single panel we wanted, which is physically impossible at SDCC. Also, small businesses can still afford floor space in the exhibit hall, so I got to see a lot of local indie designers I like (and interview a few for Geek Girl Pen Pals). 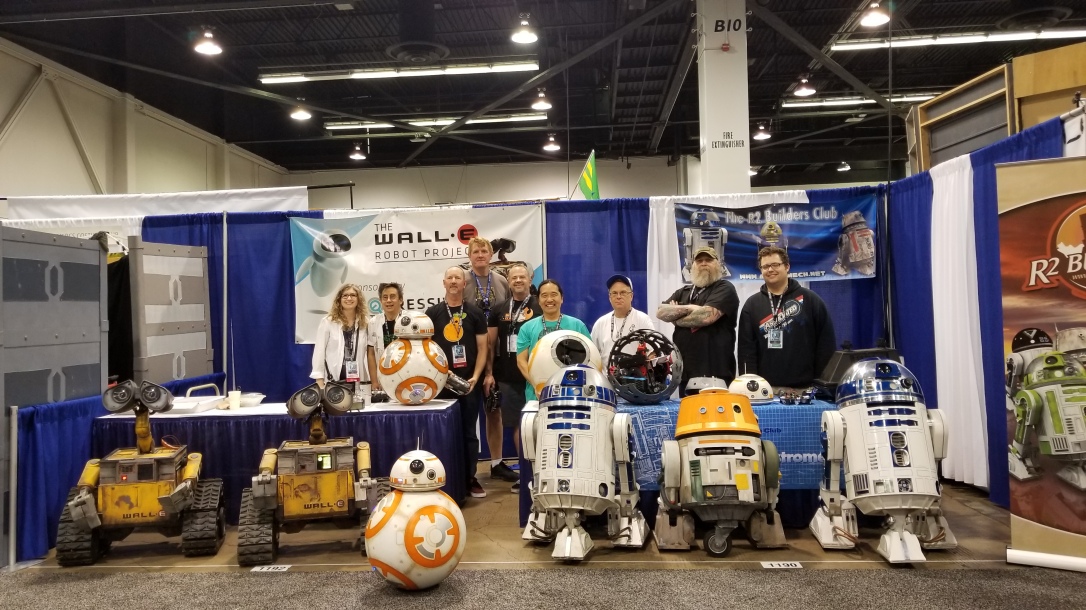 Highlights of the panels I attended included An Afternoon with Patrick Rothfuss, which was a spotlight panel featuring the author wherein he told stories and sort-of answered questions; The Science of Pacific Rim, with scientist panelists debating the feasibility and possible biology of the giant robots and creatures from the Pacific Rim series; and a screening of an episode from A Series of Unfortunate Events, which just added season 2 to Netflix this past weekend. 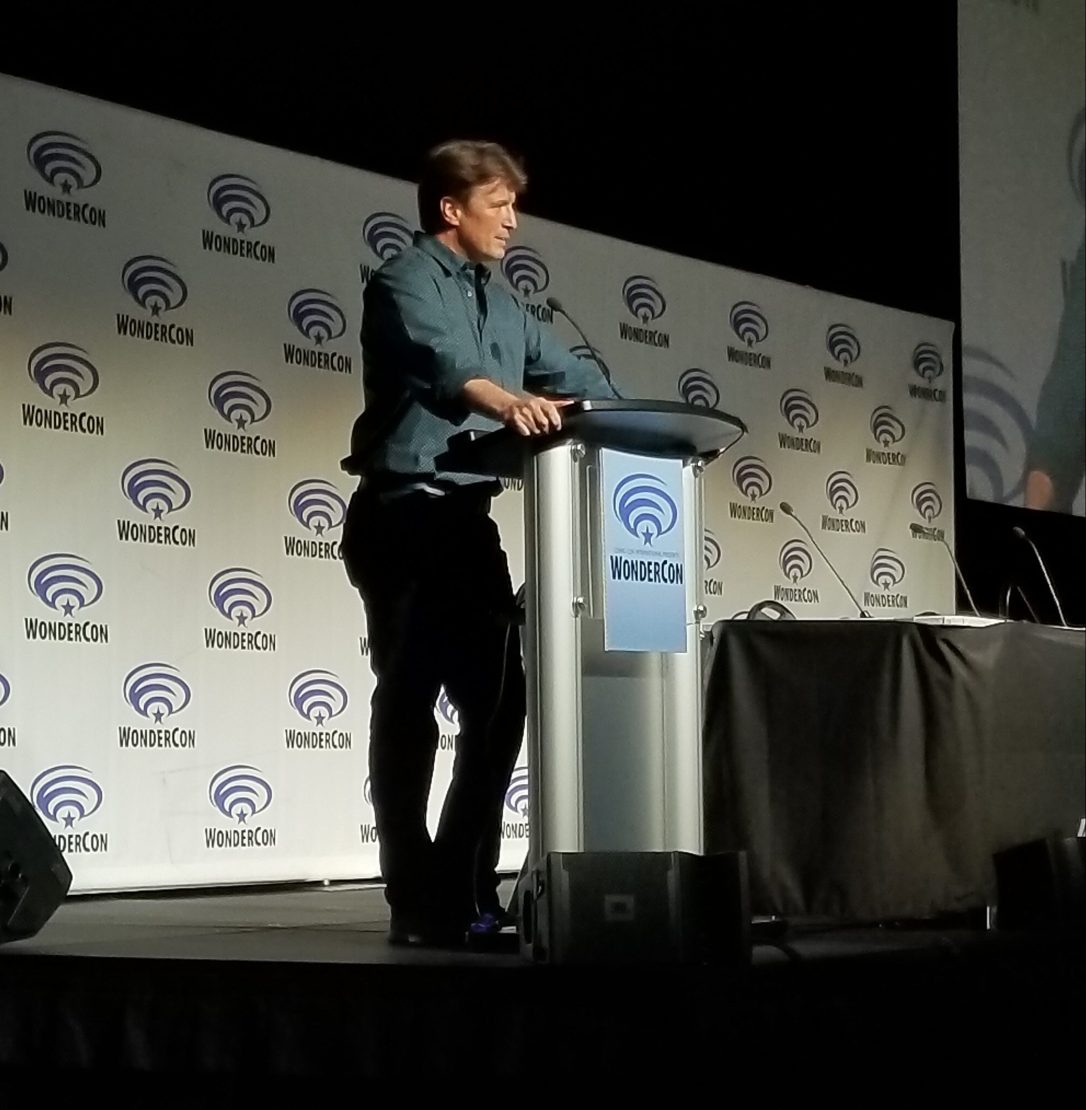 A Series of Unfortunate Events is one of my favorite book series, and I’ve been enjoying the show quite a bit. The screening was introduced by Nathan Fillion (which meant a reeeaaally packed out room– though I managed to score second row seats!) who plays Jacques Snicket in the 2nd season.

And then it was Sunday and we had to come home and go back to “real life” the next day. But it was a fantastic 10 days and the very needed break from the whirlwind of the last several months. I feel more balanced in this whole school/life thing and that’s good, too. I’ll leave you with my “Easter kitty” and wish you well. 🙂