I don’t normally list recipes here, but I’ve been working on perfecting one for this time of year: a dairy-free PSL. (Yes, you can get non-dairy milk alternatives at Starbucks, but if you’re in the US, there’s dairy* in the syrup they use to make the coffee pumpkin-spicy, so it’s become a no-go for me (at least, without a big dose of lactaid).

Never being one to go down without a fight (or to give up my autumn tradition of a birthday PSL), I decided to figure out my own version using oatmilk. After a couple of months of tweaking, I think I’ve nailed it, so I’m sharing in case you also want to DIY at home! 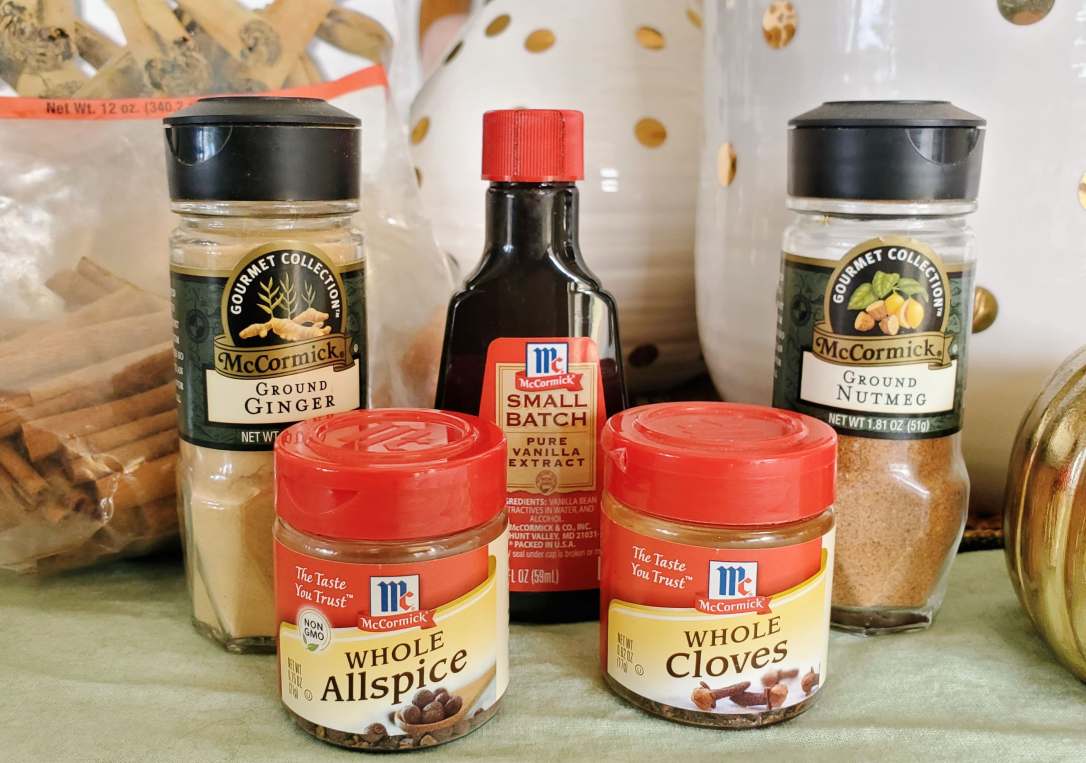 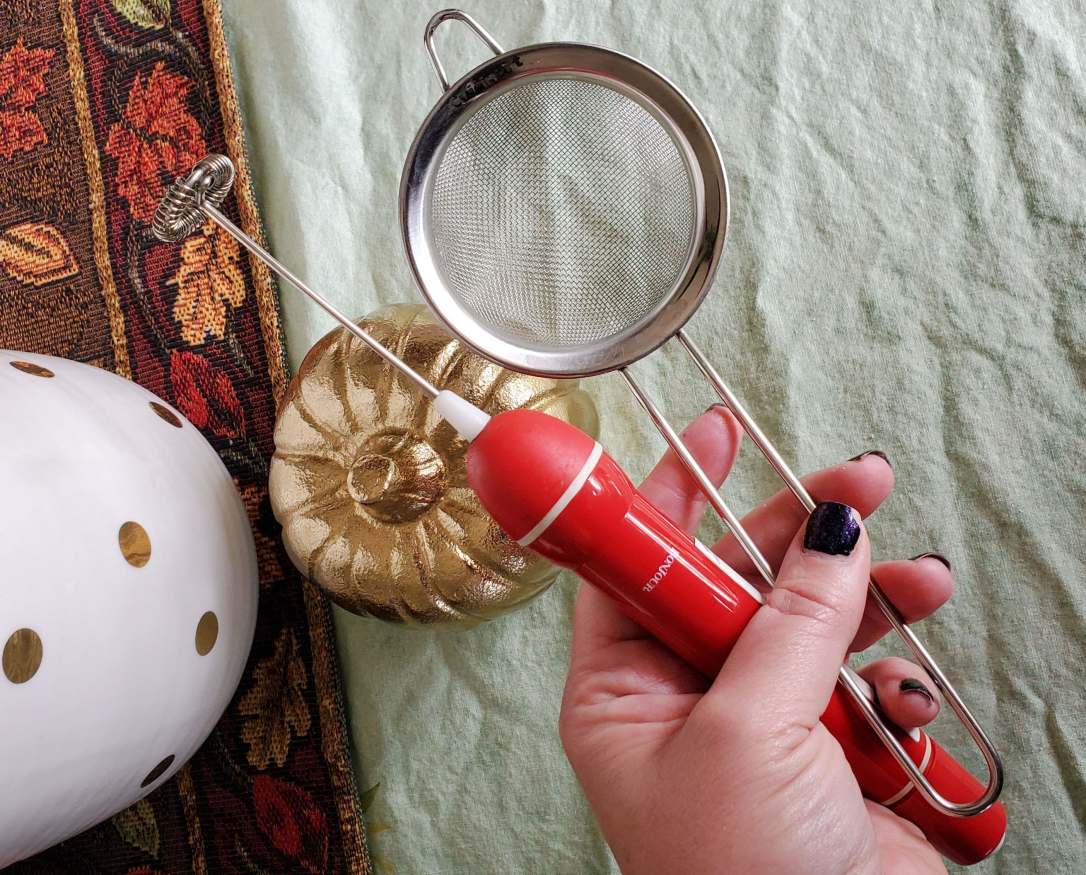 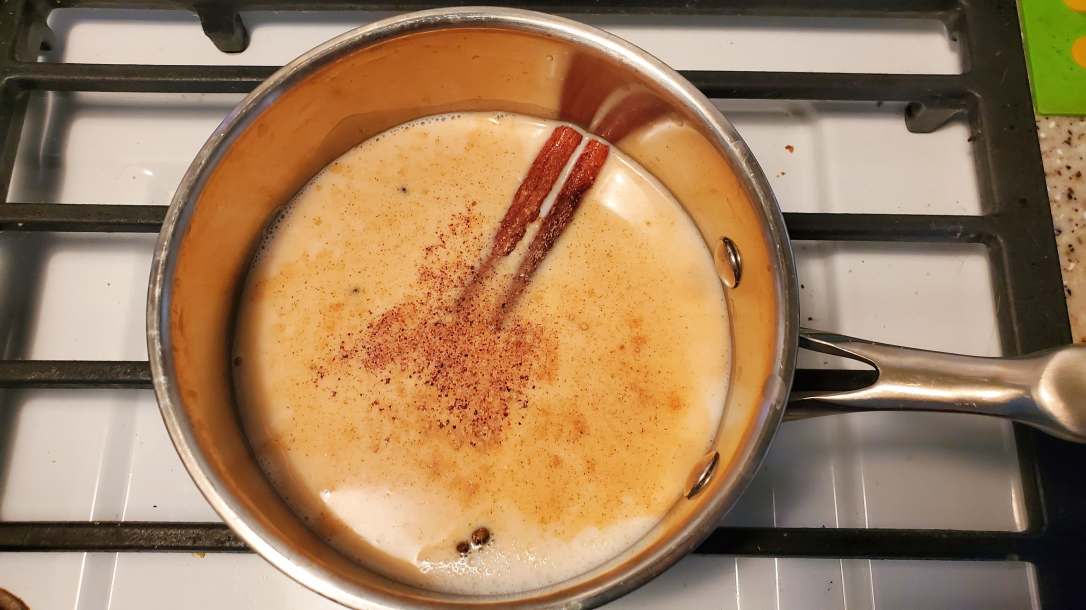 Pour your oatmilk into a small saucepan and add ALL of the other ingredients. You don’t even need to stir. The whole spices will float and the sugar can be in a big old lump in the center of the pan. It’s fine. I promise.

Set the mixture to simmer on a low heat. Don’t rush this. Trust me. Once it starts going you’ll have to move quick enough, so you don’t want to accidentally burn the milk by setting the heat too high to begin. 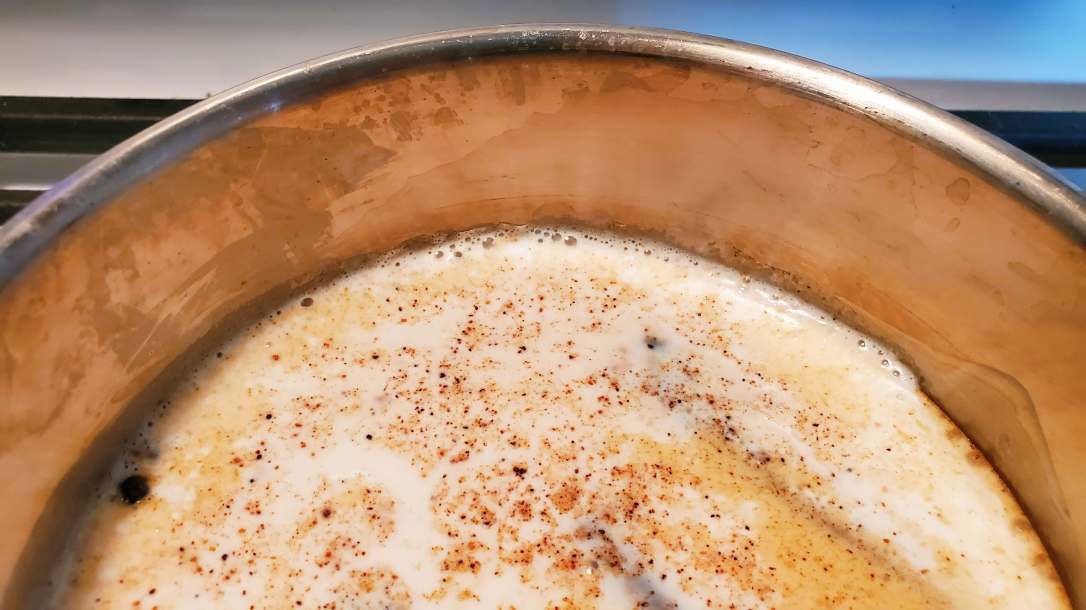 Wait for the oatmilk to simmer. You’re looking for small bubbles to begin to form all the way around the edge of the pan, like in the photo above. This isn’t quite there, as you’ll notice that the right-hand edge doesn’t have bubbles yet. But it’s close, my friend. Very close. Your patience will be rewarded.

Once it’s bubbling all the way around the edge, but BEFORE the milk has started to boil, it’s finally time to mix it! 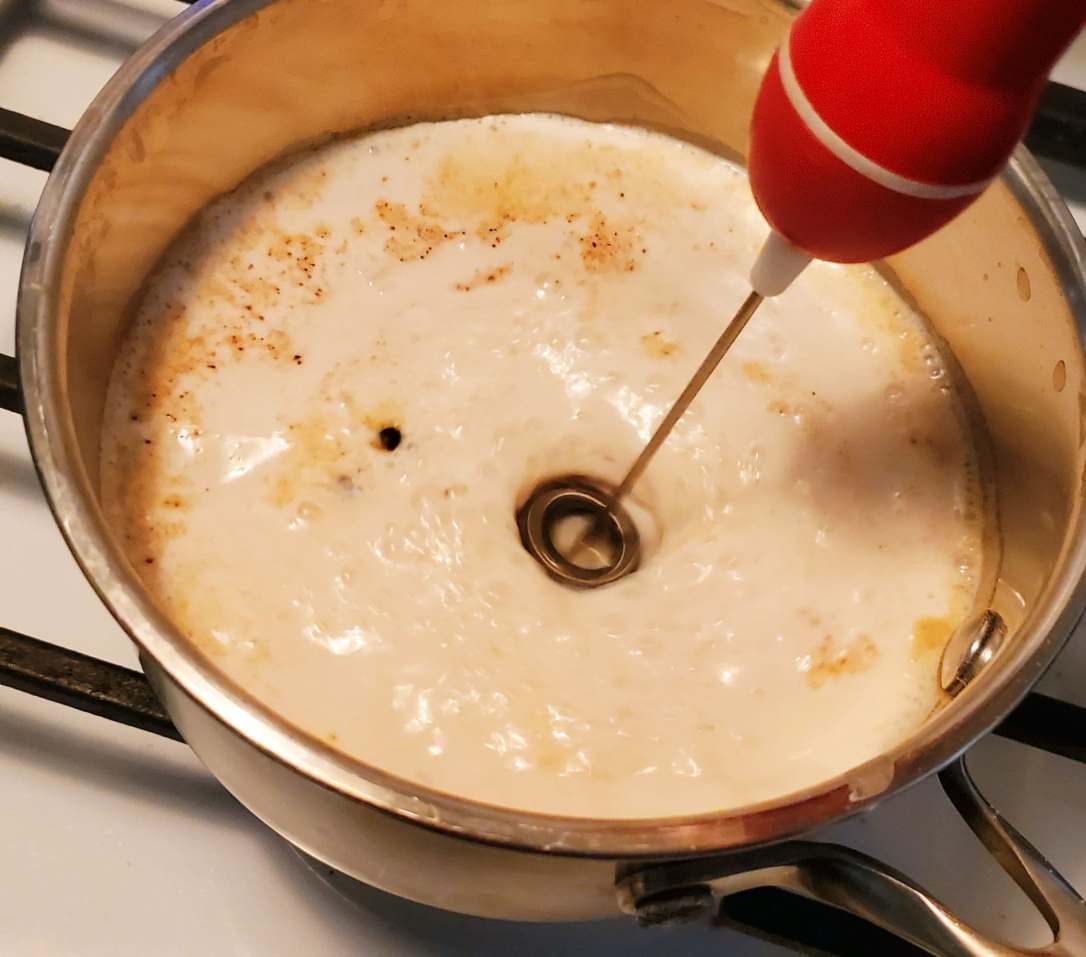 I use a hand-held frother for this part to create the foam that makes this a latte in particular, but it isn’t necessary. You could also use a whisk or a wooden spoon. The important thing is to quickly mix the milk and spices so that everything is evenly distributed. Be sure your tool is fully submerged in the milk, and not at the top (so, like the image below, and not the one above). 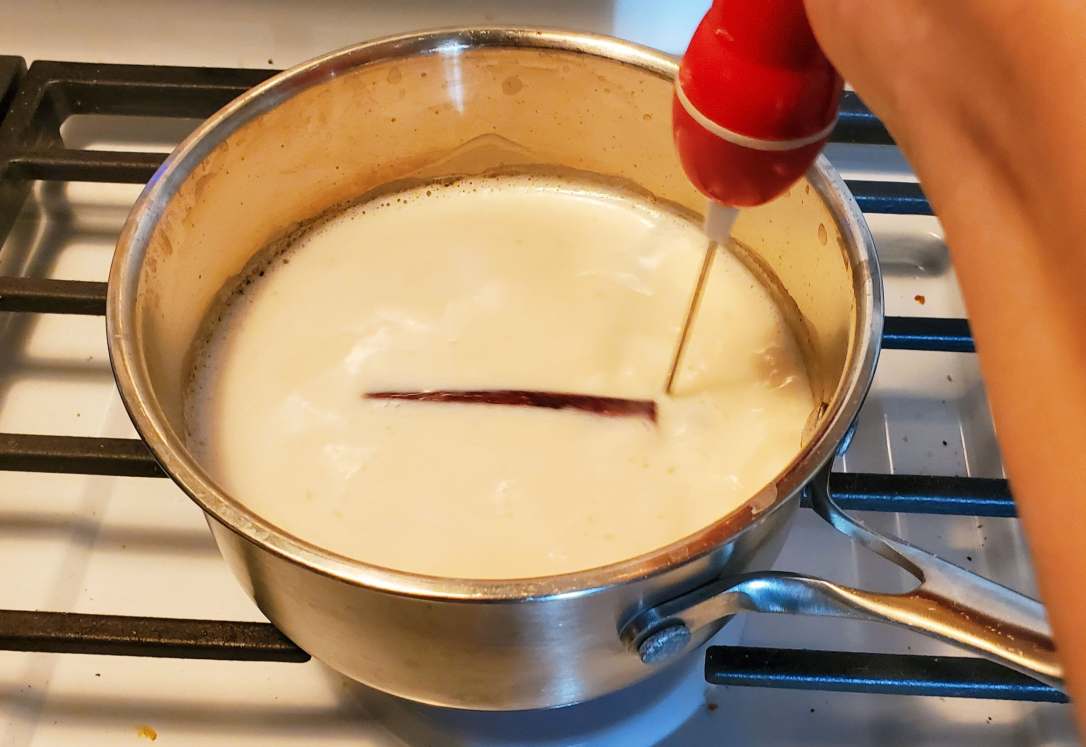 Mix until the oatmilk starts to look a little foamy– if you are using a spoon, the heat from the near-boil will help you with this. If you’re using a whisk or a hand frother, the spices will knock into the tool and that’s okay. Oatmilk isn’t going to foam quite like dairy milk, and you’ve still got to strain this stuff, so just roll with it. It’s fine. Trust me.

Now, once you’ve got a bit of foam but before the milk boils (and it will boil over if you don’t stand there with it, so do not walk away or you will regret it as you scrape dried oatmilk off of your stovetop), it’s time to pour. Hold your strainer over your cup of coffee and pour the entire mixture through the strainer. The whole spices will be caught and the spiced oatmilk will fill the rest of your giant cup. (I don’t have a photo of this because it takes two hands.) It also takes a bit of practice to pour smoothly without spilling any oatmilk, but that’s all right. As long as most of it goes into the cup, you’re okay. 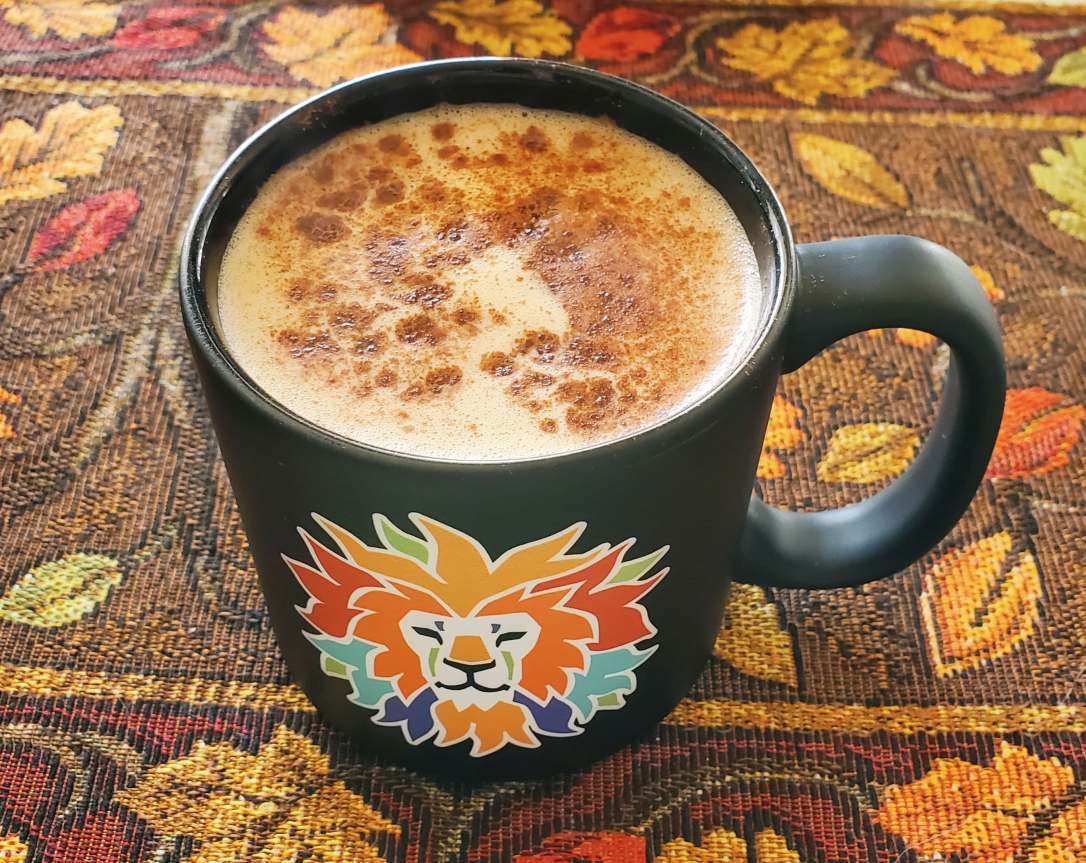 Sprinkle a little dusting of powdered cinnamon on top to make it pretty if you like. Either way, your vegan PSL is ready to be enjoyed! You’re welcome.

*Starbucks Pumpkin Spice Latte ingredients list (note that the syrup contains condensed milk). You can, however, order them vegan in Europe.