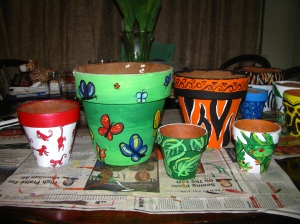 I finished painting the last of the pots today. Well, I finished the ones I was able to prime (so, 11 of the 13); two are stuck together and I’m afraid I’ll break them, so I’m hoping that as the weather changes, they’ll change size and I’ll be able to unstick them. Anyway, I like the butterfly one the best, but the red monkeys were fun to paint. The tree frogs were harder than I thought they’d be and didn’t turn out exactly the way I wanted, but they don’t look awful. All I’ve got left is to put a clear coat over them to make them weather proof and I’m done.

I also found out today that you can buy Starbucks’ coffee flavors (well, some of them), so I got myself a bottle of the cinnamon dolce one. It’s a very large bottle, and it’s not just how they make the cinnamon lattes, but it’s the “spice” in their caramel apple spice drink, which is my favorite non-caffeinated drink of theirs. ^_^ I made one tonight.