Fog at Cape Hatteras: a weekend at the North Carolina Outer Banks 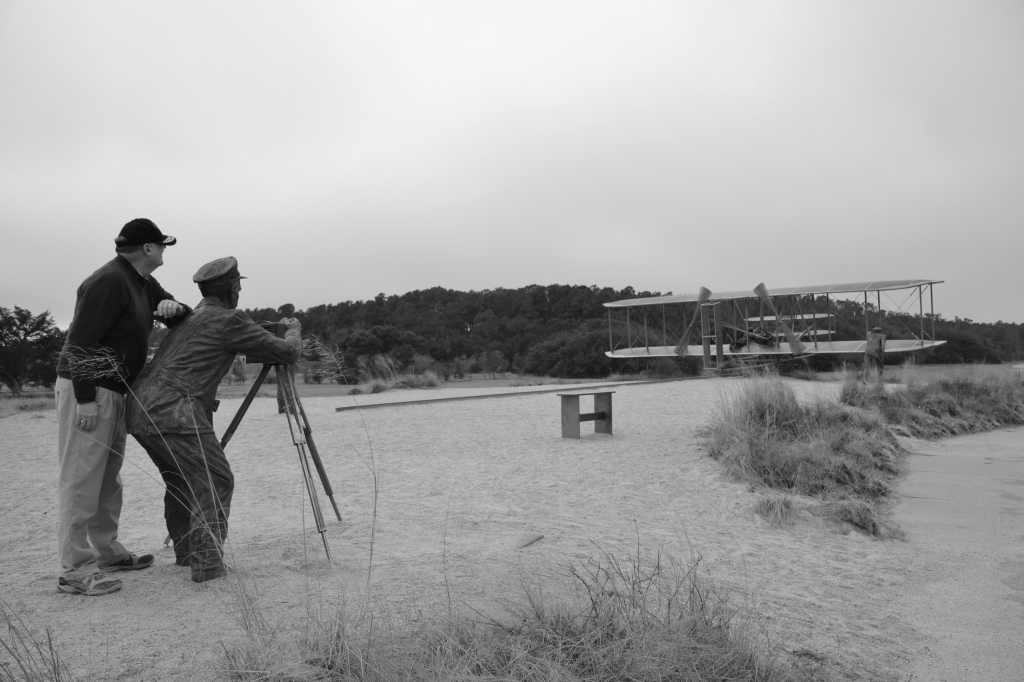 I moved to North Carolina when I was fourteen. I have spent countless weekends in the North Carolina mountains (and up into Virginia and over into Tennessee), be it for day trips or camping weekends or summer vacations, but until I was in my twenties, I had never been to the Outer Banks. In fact, I was close to twenty-seven when I first visited. I’m not entirely sure of the reason, but I suspect it had something to do with a childhood spent largely in Florida (either visiting grandparents on the gulf coast or living there in elementary and middle school) so that the North Carolina coast just wasn’t fascinating. Or maybe it was because we haven’t lived properly near mountains in a while. Whatever the reason, it took a long time to go east. And my parents still hadn’t been, though they had visited the southern part of the NC coast. I decided this needed to be remedied.

This weekend I managed to convince my parents to come with my sister and me to Cape Hatteras. It was supposed to be warm (in the 70s!) and sunny and we drove over on Friday night… in an ever-thickening blanket of fog. We kept expecting the fog to clear, but it never seemed to lift. The forecast said it would clear on Saturday, so when we got into Nags Head around 11pm we didn’t worry.

Saturday dawned cool through the layers of fog and cloud. The beach was mostly deserted.

We started our trip with a stop at the site of Wilbur and Orville Wright’s first flight, in Kill Devil Hills near Kitty Hawk. There is a reproduction of the flyer there, as well as a museum and monument, but to me the coolest part is that the original flight line is marked, so you can stand and see exactly where they were, and how far they went.

From there we headed south and had a short visit at Fort Raleigh, the site of the Lost Colony. I’d never been there, and would like to go back in the summer when they do the outdoor play about it, but in the misty forest it was easy to picture what it must have been like for them, wandering into unknown woods, looking for a place to live. It was warm enough this weekend for squirrels and birds and even a toad, and despite the muffling fog, there was birdsong and rustling and it was nice to hear the fits and starts of spring. 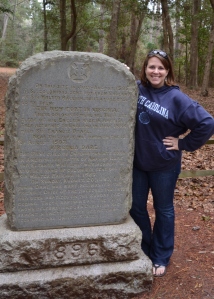 After a quick lunch, we headed south toward the national seashore and Cape Hatteras. We stopped at Bodie Island to see that lighthouse, and then kept going south. The road appeared in front of us as we drove, like the fog was rolling back just before we reached it, and then sinking behind us again. Finally we reached our goal, and saw the Hatteras Lighthouse rising over the trees, barely visible in the mist, except for its spiraling black stripe. 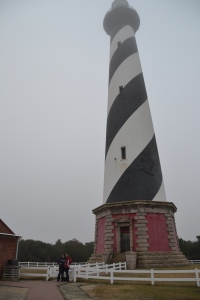 The lighthouse isn’t at its original location, having been moved over a decade ago away from the eroding coast. The Outer Banks are always shifting, and anything built along the coast might not be there this time next year, but the lighthouse has been preserved.

We stayed long enough to walk through the keeper station (which, it turns out, is another thing for which my sister is too tall), but the lighthouse wasn’t open for climbing, which was just as well because by then it was getting cold again and we were tired, with a long drive home still ahead of us.

All in all, it was a really nice trip, and felt much longer than the actual twenty-four or so hours it lasted. I’m glad we got to go. Next week I’ll be on the exact opposite coast, which is kind of strange to consider, but also exciting. Here’s to more exploring!

[update]
Photos from the trip are now posted at the photo blog. ^_^

One response to “Fog at Cape Hatteras: a weekend at the North Carolina Outer Banks”