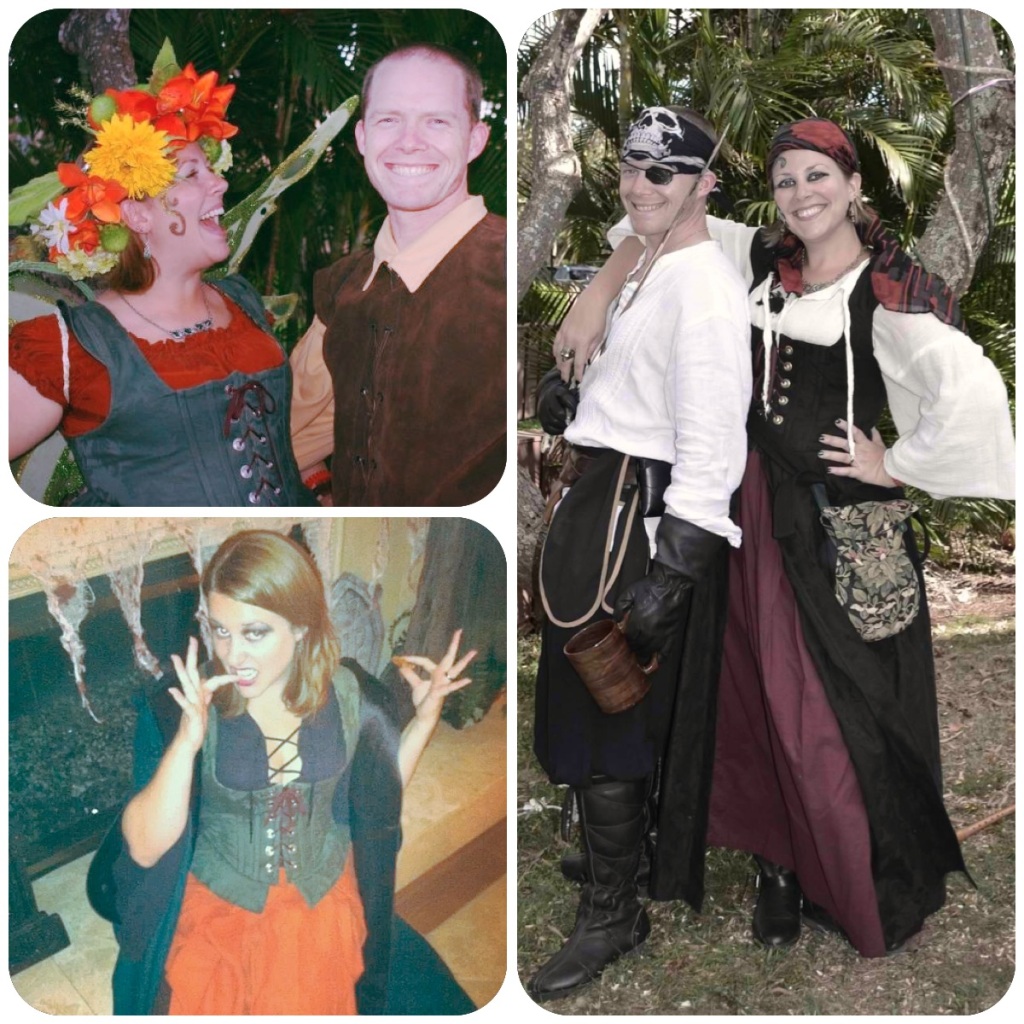 I love cosplay. I should qualify this by saying I love costuming, and very rarely dress as a specific character (though I’m hoping to change that in the coming year), but I have found over the years that such hobbies can get to be pretty expensive. I’m terrible at sewing but I’m very good at finding and collecting, and I have accumulated an entire wardrobe of pieces. That being said, there are definitely some that were more expensive than others, so how do I manage to stay within my budget? By investing in pieces that can multi-task.

If you look in the pictures at the top, you’ll see that both costumes on the left use the same green bodice, as a fairy and as a witch. That same bodice is actually reversible, and the other side looks like a tapestry with leaves and animals for when I want to change the look (the fabric matches the pouch I’m wearing in the pirate photo). It set me back about $125, but it has lasted for almost 10 years as a staple in my costuming wardrobe. I’ve been a fairy and a gypsy, a witch and a hobbit, and of course I’ve done renaissance festivals for years. It’s a versatile bodice and, because it’s in a basic green, goes with almost everything.

The other workhorse in my closet is the black dress on the right. It’s similar to the green bodice (made by the same tailor) and I’ve used it dozens of times as the base of a great cosplay. There you see it as part of my pirate costume, though it’s been a vampire and a witch, not to mention a princess (with the right accessories!) and a general merchant’s wife look.

You may notice that there are three different tops in those outfits. I find that having basics like white and black are most useful, though the short-sleeve orange peasant top has been a fun addition. My black and white tops are actually designed for men– those are generally more affordable, plus look fantastic when you gather the sleeves, or if you want to wear pants instead of a skirt. 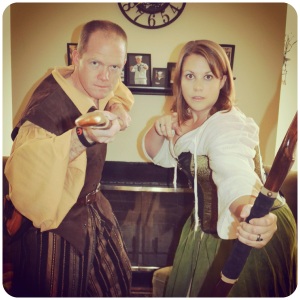 Here is another example of the multi-tasking items: notice I’m wearing the same white top as the pirate costume, and though it isn’t visible, the green skirt was also part of the fairy costume (although hitched up to make it shorter). J is wearing the same top and brown jerkin as in the fairy picture as well. This photo was to showcase the pieces we acquired in April: the pants for him and the corset for me.

The next thing I want to point out is that the colors we use for our costuming are mostly interchangeable. Having pieces that all basically go together makes putting them in new combinations much easier. I stick with greens, burgundy, and black mostly, while J tends to wear black, brown and gold. Because any given top, skirt, or pair of pants will go with any of my bodices or corsets, I can mix them up into many more outfits and therefore more costumes. 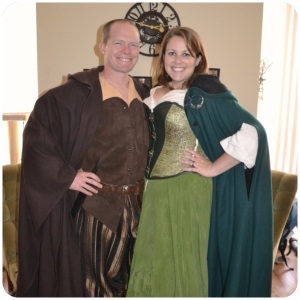 And that brings me to the last point. Successful costuming is really all

about the accessories. Having the basics for multiple costumes is essential, but the way to make each one different (so that it doesn’t look like you’re wearing the same thing every time) is to find accessories that are specific to each one, and don’t have to cost a

fortune. The pirate scarf and some skull jewelry came from Hot Topic and made that costume pop, and I found

black boots with large buckles at a thrift store for about $7. I got to reuse the black boots for my witch costume, and will probably find many other uses for them in the future. Multi-taskers. Makeup is important, too, but that will have to be another post entirely. ^_^

Bodices and dress by Felix Needleworthy
Pirate scarf from Hot Topic (though it’s been a while ago, so no longer carried)
Skirts and blouses from Felix, and from Ophelia’s (I like the split-front skirt because it’s fun for layering)
Corset from Pendragon Costumes (steampunk/neo-Victorian section)
Flower headpiece was homemade by a friend.

Jewelry came from a variety of sources; I always keep an eye out for pieces that would work and get them when I see them. For instance, necklaces with coins on them work for pirates, gypsies, belly dancers, and more.
Honorable mention goes to Texas Body Hangings for the exquisite cloak I have, though they don’t seem to have a website anymore.

One response to “Bang for your buck: finding multi-tasking cosplay items”