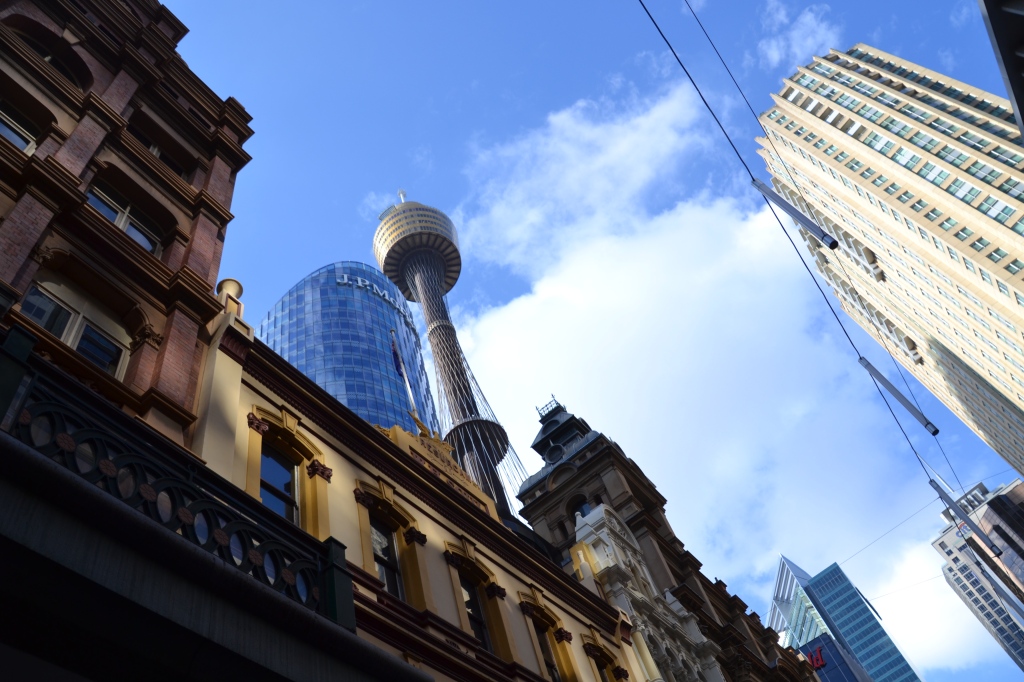 So I’m finally getting around to getting some of my photos from our trip to Australia up and realizing I have a lot of them…. Over 3,000 actually, but as it was a three week trip, I guess that’s not too bad really. At any rate, I’m going to begin with our first stop on the journey: a three night excursion in Sydney.

We arrived around 7am on a Sunday morning after flying direct from Los Angeles, and were in need of food, caffeine, and a good, long walk. We dropped our bags with the concierge of our hotel, the Castlereagh Boutique Hotel (fully restored 1920s art deco with modern updates), and set out to explore the local area on foot. We soon found ourselves walking through pedestrian streets and down little alleys that led to coffee shops and bakeries– very welcome after the long trip! We wound up at The Strand, an upscale indoor shopping arcade built in the 1890s at a great little cafe for tea and fruit toast. 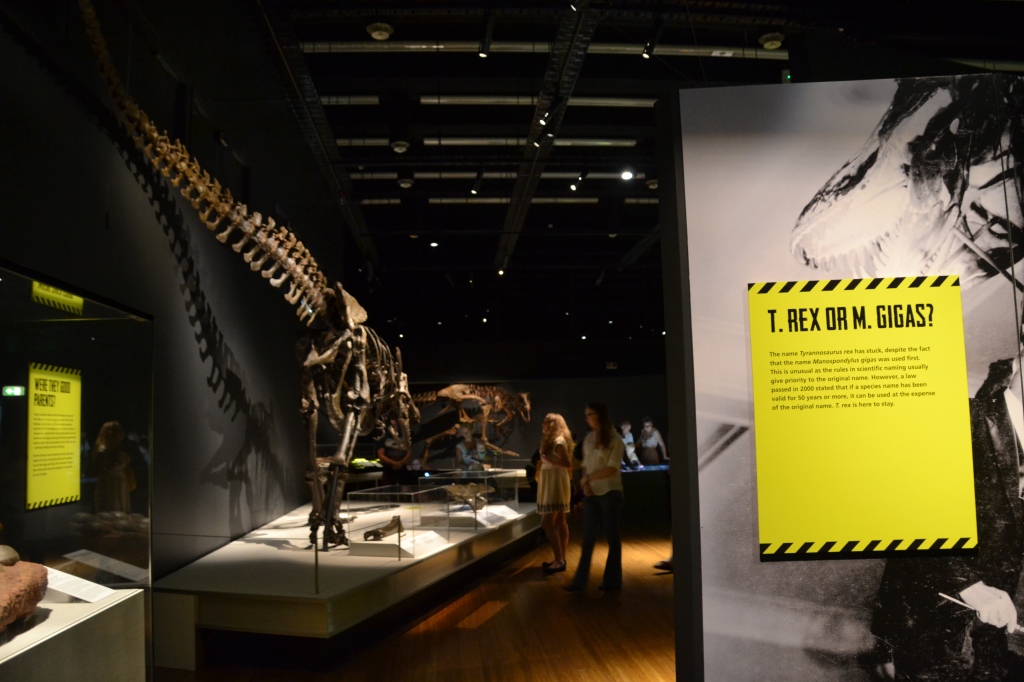 After a good meal we meandered a little more and found our way to Hyde Park, which is also near many of Sydney’s museums. I was interested in the art museum, but the one that caught our eye that first day was The Australian Museum, Sydney’s natural history trove, and their current exhibit called Tyrannosaurs. It featured dozens of real fossils (not just replicas) exploring the surprisingly diverse genus that includes T. rex. It was interactive and educational and we had a great time exploring the galleries. They also have a good collection of native Australian specimens, both already extinct and threatened, and it was fascinating to learn about them. We finally checked into the hotel and ate dinner at a recommended nearby pub.

The next day we headed to the Taronga Zoo for the day, despite the weather turning cool and rainy.  We took the ferry to get there and it afforded us wonderful views of the harbor and the Opera House, which is designed to look like sails, the angles all formed from a single circular shape.If you are going to Sydney and are heading to the zoo, I recommend going via Circular Quay and booking a ferry ticket along with your zoo admission at a kiosk there– it’ll provide you transportation and these great views, plus a big discount on both. 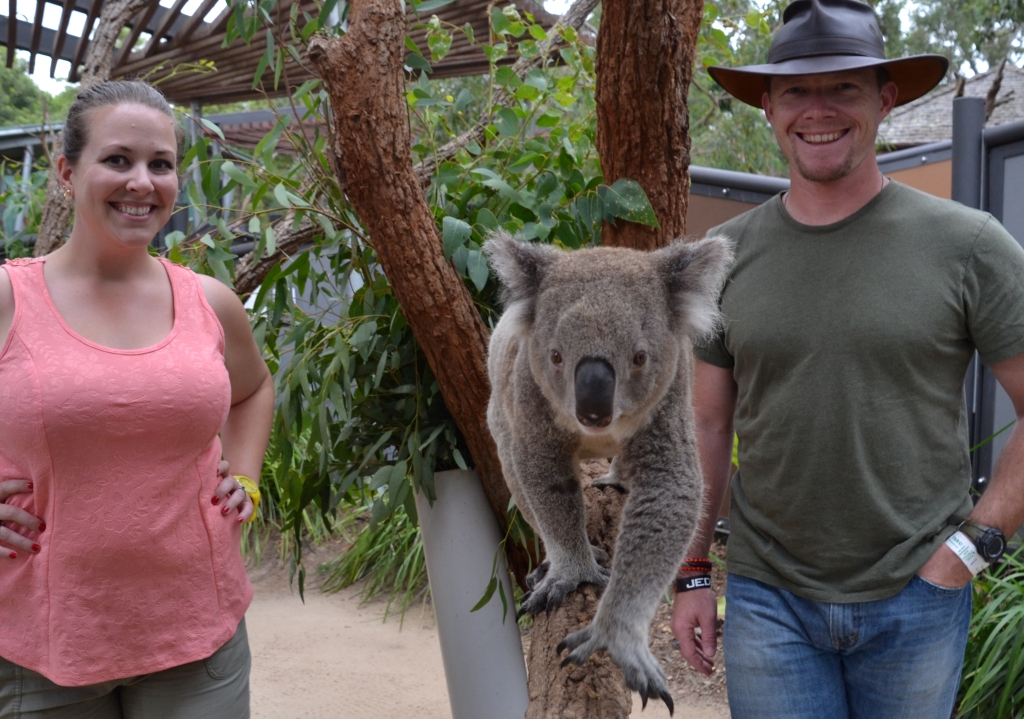 The zoo was lovely, perched above the harbor and easy to navigate in a day. Though with some steep climbing in some parts, the zoo was very wheel-friendly (either chair or stroller) and had pretty good signage as well as helpful and visible staff. We got to meet a koala up close and saw a lot of native animals, though I think the best part by far was the nocturnal exhibit. It housed a huge number of Australian animals, most of which people never see. I was especially fascinated with the two types of echidna on exhibit and the spotted-tail quoll. We didn’t see every single animal, mostly because we were both more interested in Australian animals than the usual zoo residents, but the docent-led walking tour of the big cat exhibits was well worth the time (meet in front of the sun bear exhibit at the daily posted times), as was the walk-through lemur exhibit.

Our last full day in Sydney, we woke up early and headed back to Hyde Park and the museums. As I mentioned earlier, Hyde Park is near the museum district, but it also adjoins the Central Business District with all of the shopping and contains several memorials and gardens. We stopped by Saint Mary’s Cathedral on the other side of Hyde Park and then headed into the Royal Botanical Gardens to enjoy the early morning light while we waited for the art museum to open.

Inside the garden, we found several cafes and restaurants, so we stopped and had tea and seed cakes. (Side note: the seed cake was amazing and I think this recipe would be pretty close to it!) The local birds were very brave, swooping toward our plates the moment it looked like we were facing another direction, but I managed to eat all of mine myself. The guys at the table behind us didn’t fare as well!

The gardens were beautiful, and everything was incredibly well labeled, so that every crossroads had directional signs telling guests not only which way to go, but how many minutes it would take to arrive. We explored a lot more than we would have otherwise because the signage made it simple to find our way back to the art museum, The Art Gallery of New South Wales. This museum was a wide-ranging collection of Australian artists from the nineteenth and twentieth centuries, Aboriginal art, a smattering of European masters (including some Rubens and a Monet), and a whole collection of East Asian artifacts from pottery to clothing to calligraphy. They also have a large modern gallery including some interactive and experimental exhibits.

We had a nice time roaming the galleries, but there was some sort of press event happening so after about two hours we headed back outside and walked along the park until we reached the Opera House. Since we’d only seen it from the water, we decided to explore a little and actually go inside the iconic structure. From there we walked along Circular Quay and got lunch, then headed into The Rocks, Sydney’s oldest European neighborhood and now a nice shopping and dining area including souvenir shops, pubs, markets, bakeries, fine dining, and all sorts of goodness, not to mention a museum and other historic markers. All in all, it was a great way to wrap up our three days.

Notes: We walked everywhere we went in Sydney except while on the ferry, and put in several miles (many more km) a day, so if you’re not up for being on your feet for hours, look into public transportation. Taxis weren’t a bad option, and we used them to get to and from the airport. The light rail runs to and from there as well, but had a long wait and would have left us schlepping our luggage several blocks to our hotel. The taxi took us right there with almost no wait time. There is also a free bus line (bus number 555) that I learned about on my second stop in Sydney that runs during the day, every ten minutes.

Places we ate that I’d recommend:
Strand Espresso: great selection of tea and coffee plus table service, it’s inside The Strand Arcade
Bon Bon Chocolates: also located in The Strand, it’s a gourmet chocolate shop upstairs, bistro and tea shop downstairs (in the basement) and all yummy
Grand Dining Room at Castlereagh Boutique Hotel (breakfast every morning after checking in)
3 Wise Monkeys Pub: craft beer and sports bar type place with a solid bistro menu
City Extra: old-style diner right on Circular Quay with great views of the ferries and water, plus open 24 hours a day
Ippudo Ramen: some of the best ramen I’ve ever had, and perfect for chilly rainy days when  you need to rehydrate from the warm climate
Fortune of War: No food here, but one of the pubs that claims to be “Sydney’s original,” and definitely a hole-in-the-wall stop for a pint
Redoak Boutique Beer Cafe: craft beer gastropub with really nice tasting menus that pair their beers with a selection of entree tastes or cheeses, depending on what you want.

One response to “Australia 2014: Starting in Sydney”